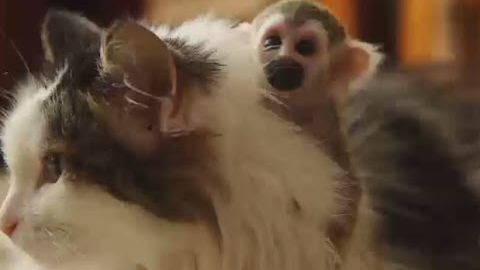 Life is amazing, and when you least expect it, a surprising person will come to the rescue. This baby squirrel monkey was born in Tyumen zoo, but sadly, his parents rejected him. At a loss at the situation, the zoo director had to look for a foster mother for this little monkey. Named Fyodor, this Russian primate was part of the zoo director’s experiment where he was brought home to the director’s house while things were figured out.

Surprisingly, their 16-year-old cat Rosinka and Fyodor got along well. The senior cat and the squirrel baby monkey cuddle nonstop, to the amazement of the human parents.

Born in a Siberian zoo, Fyodor was given a chance at life when the senior cat adopted the baby. The two may be unlikely candidates for mother and child, but the maternal bond for an orphaned baby runs strong. Babies evoke a protective instinct in all mothers, and this case is no different, even though they both are of different species.

Love overcomes all barriers. When the baby matures, he will be released back with the other squirrel monkey population, but for this moment – he’s safe in the loving paws of his mother cat. Watch him carried all over the house on the back of his feline mom.