If you have never heard of the “Top Secret Drum Corps” don’t worry, most people haven’t. Their name alone suggests a hint of privacy, and their identities are well hidden. The group of talented drummers hail from “Besel” in Switzerland and until 2003 were probably the countries best kept secret.

It was back in 2003 that the Corps were first invited to “Edinburgh” for that cities famous “Military Tattoo” held in the picturesque esplanade of Edinburgh castle. This invitation bestowed the honor of the Corps being the only non-military, non-British act to ever perform there. Since their initial invitation they have performed at the Tattoo in 2009, 2012 and 2015.

“Top Secret’s” home city of Basel has a rich drumming history, it is said that the city has over 3000 active drummers at any one time, and perform at the famous “Fasnacht” parade as well as many other parades and festivals including the annual “Trommelkonig” (Drummer King) competition. The Basel drumming style is based on the military style of drumming dating back to the middle ages. The main difference between the military style of drumming and the “Corps” style is that they play at a more rapid pace. “Top Secret” also have a lot of fun in their routines including such things as “Dueling Drummers”, “Stick Juggling”’ “Exploding Flagpoles” and many other tricks designed to make the crowd go WOW. 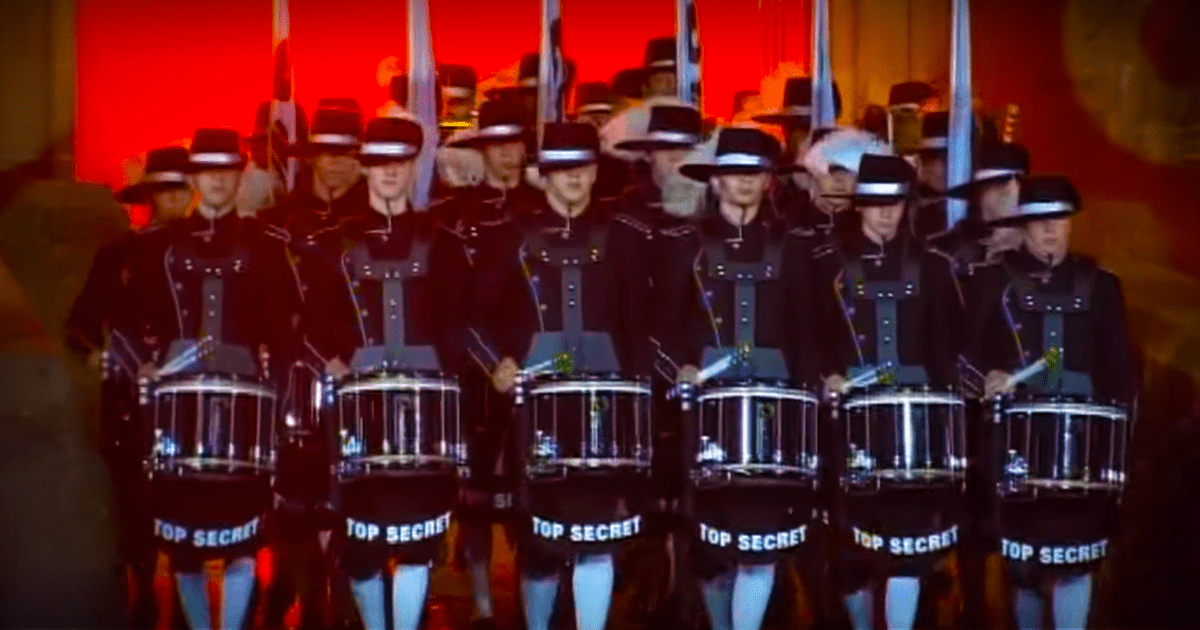 It is interesting to note that because of their 18th century military style uniforms, most people think that they are associated with the “Swiss” military, this of course is so far from the truth. The members of “Top Secret” have a myriad of differing backgrounds and jobs. There are Bankers, Civil Servants even factory workers amongst their ranks, as well as highly dedicated college students, and the membership changes quit regularity due to the demanding nature if their performances.

When you watch the clip below you will just be amazed at the skills of this group of totally dedicated men. Their choreography and timing is so in-sync that it will leave you breathless. The use of each other’s drums and sticks is just amazing, as is the timing of their pass-through sequences which I can only assume has taken hours of rehearsal time to get it just right.

If you have never seen a drumming band routine before then this is the one to watch, they have certainly raised the bar for all other “Military Style” units to follow, as they take this style of entertainment to the extreme. I think once you have seen them perform, you will be keeping an eye on your television schedules for next years “Edinburgh Military Tattoo”, a must see for anyone with an interest in this style of entertainment.