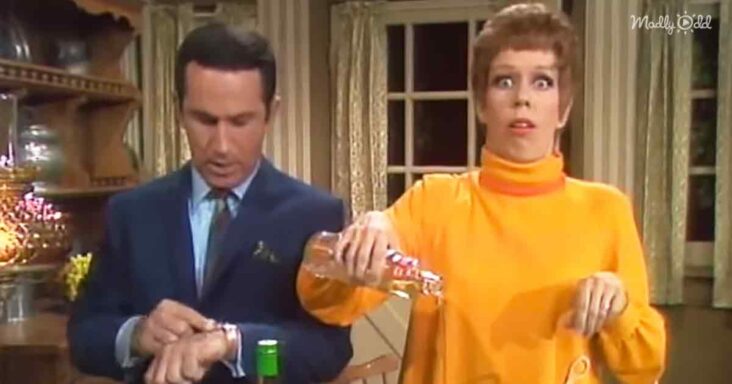 Carol Burnett alongside Don Adams in this hilarious sketch from The Carol Burnett Show. Starting with the title The Lost Purse, the skit begins in a home. Carol plays a wife making dinner. 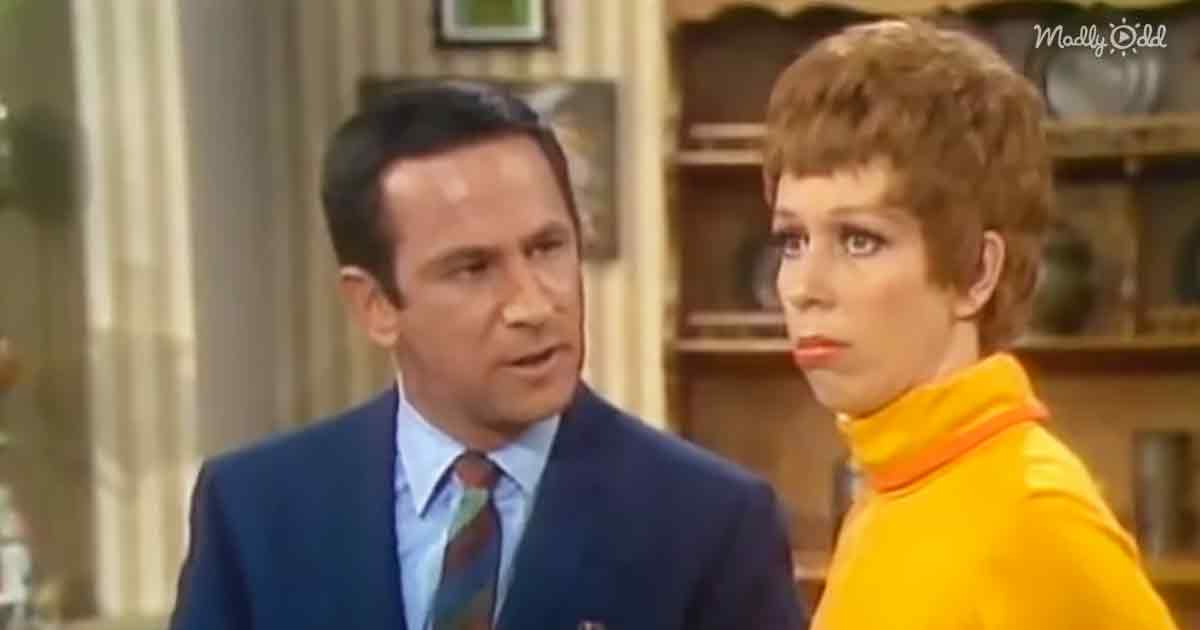 While cooking, her neighbor enters to ask if she’d like to come to play bridge. Carol says that’d be swell. She then tells her about the hectic she’s had.

The highlight of her day was losing her purse. She admits it only had 2-3 dollars and some old papers that her husband asked her to pick up from the bank. It’s no big deal to her.

Carol’s husband, played by Don Adams, arrives home. He stresses how he can’t work tonight. He’s being audited for his tax returns in 1964 and may need to pay $2000.

Carol is shocked, but Don tells her not to worry. He kept every receipt of everything he spent in 1964. Well, he did anyway.

He brings up how those receipts were the papers Carol picked up that day. A horrified Carol is shocked while making a salad, drowning it in vinegar. Don doesn’t notice her dismay, going to wash himself up before dinner.

Fearful of Don’s temper, Carol asks for the neighbor’s help. Fearing her husband will kill her, she begs the neighbor to slit her wrists. The nervous neighbor leaves promptly. Carol remarks that she’ll never let her borrow sugar again.

Don enters the room and asks for the papers while making a drink. Carol tries to coax Don into taking a nap, but he’s only thinking about his taxes.

Desperate for a distraction, Carol throws every alternative at Don. She suggests he should see his brother. Don brings up how his brother lives in Wisconsin. 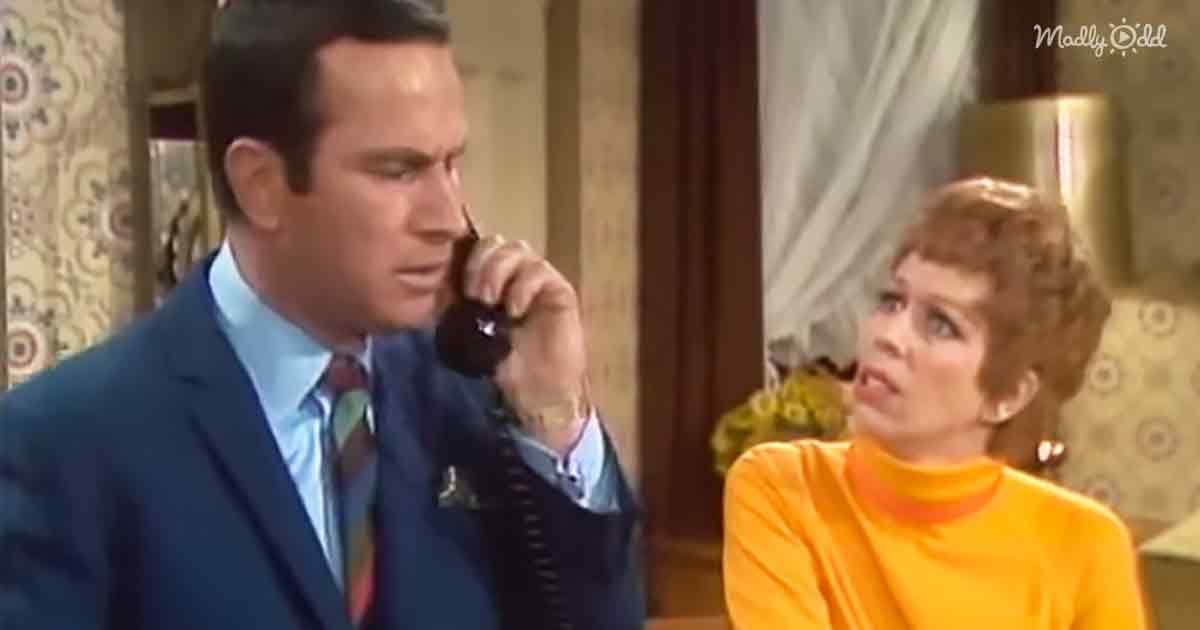 An angered Don can sense something is wrong. In a loud voice, he declares he will ask three questions. He vows they’re through if any of them have an incorrect answer.

His first question is if Carol bought a new dress that day. She answers no. He asks if she spoke with his mother. She says no again.

The last question is about the papers, and Carol freaks out. Don says Carol shouldn’t tell him she lost the documents. She does anyway and breaks down crying.

Don tries to calm her down and get Carol to explain herself. Unfortunately, Carol is a blubbering mess who can’t form sentences. Somehow Don can translate through all her crying, despite mishearing the last part about buses and purses.

Don goes back to yelling about how accidental his wife can be. He brings up how she should have put the papers in her pocket. Don then goes into a rant about how women never call the police about a missing pocket.

When Don discovers Carol hasn’t called the police; he rings them up himself. He asks for a lost and found for a purse containing contents from 1964. When asked to describe it, Don gets angry for being asked to describe a year.

Don’s blustering continues when asked about where downtown the purse was lost. He once again translates for his sobbing wife to give more information.

With the police offering no help, Don then demands that Carol re-check her pockets. Carol is pushed to her limits and explodes as well. Don tries to calm down and stress she should recount her day.

During this heated exchange, Carol playfully hits Don’s shoulder. Don hits her back a tad bit rougher. Not being a part of the sketch, Carol gets a little uneasy at the mistake. She off-handed remarks for him not to her again. 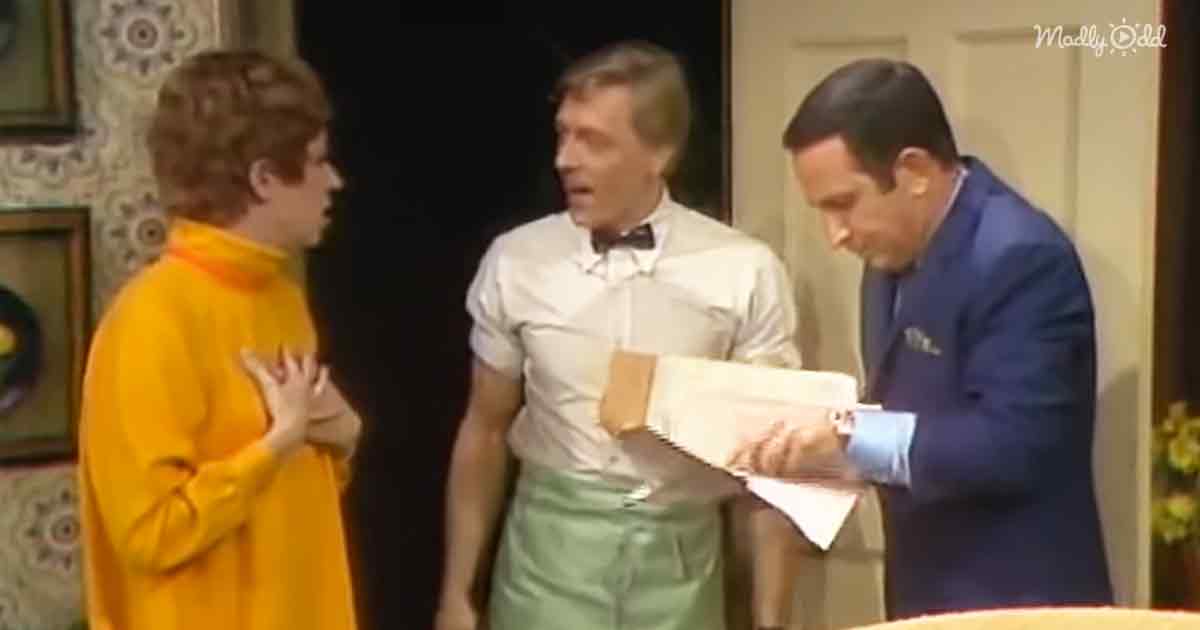 Carol and Don roleplay her day at the bank to figure out what went wrong. Don gets far too into his role as an unruly bank teller. During the reenactment, Don again brings up bitterly how she should have put the papers in her pocket.

The next stop in the roleplaying is the supermarket. Don, again, brings up how the papers should be in the pocket. And the next roleplaying on the bus…well, you can see where this reenactment is going.

After a loud fight, the doorbell rings. The grocery store clerk arrives with Carol’s purse. Don is relieved to find the tax receipts inside.

After the clerk suggests Carol keep the papers in her pocket, Don says a reward is due for this clerk. He searches for his wallet. But, whoops, no wallet to be found.

A devilish grin comes over Carol’s face. Now she gets to be the one harassing her husband over misplacing his money—a perfect end of comeuppance for a sketch filled with feuds and funny.