In the animal kingdom, it is not very common for females to give birth to twins, especially when you’re talking about large species. But in the University Minnesota’s Leatherdale Equine Center, something extraordinary took place. Princess, the mare, surprised everyone with the birth of two twin foals. Now, if this was surprising, considering that no one even knew that Princess was pregnant in the first place.

This was, without a doubt, one of the most extraordinary births that have been shared on the Internet. Science says that less than 1% of pregnancies where twins are involved, actually get to full term without any complications. Personally, I had never seen anything like this. This is not only proof that nature has its way of creating extraordinary things, but it also puts human knowledge to the test, and provides advances in science.

Henry and William, the twin foals, had to share nutrients in their mother’s womb in order to survive. Fortunately, there were no complications in the birth of both babies, and they are thankful for the care they received and the Equine Center. Now, they will be sent to a new home, so they can be raised properly in an open environment.

The only downside was that Princess got hurt during the delivery. Nevertheless, the veterinarians at the University took diligent care of her and her rehab. They also noticed that Henry, the older foal, was tinier than normal. William, the youngest, apparently had some weakness in his hind legs. This was something that would need to be addressed.

This was probably the result of them having to share their mommy’s nutrients while they were still in the womb. This led them to not be able to get all the scope of nutrients they needed individually. The way that nature surprises us with these types of rare occurrences is incredible. It is very fortunate that people with a kind heart and goodwill are there to make a difference and help those in need.

Both foals are now living in great living conditions along with their mother. The caretakers that look after them are very happy to see the progress they have made. Personally, I would like to thank all the good people at the Equine Center, for taking the time and going the extra mile to help this miracle happen. Now, if you’re ready for the full story, just click on the following video! 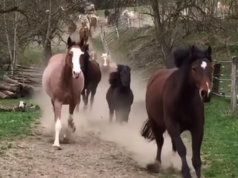