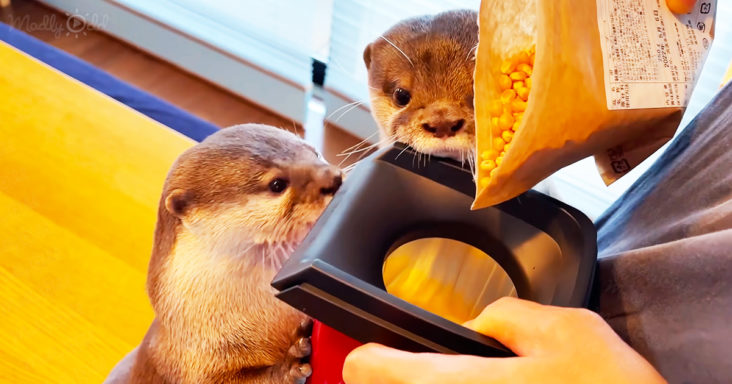 If you have ever wondered what would happen when you introduce two young otters to a portable popcorn maker, this video has the hilarious answer you have been searching for.

The two otters, who have their own YouTube channel and are quickly becoming lovable stars around the world, were at first excited by the little red Orville Redenbacher popcorn machine.

They spent considerable amounts of time investigating the machine, looking inside of it, and smelling its contents. At one point they even tried to crawl on and inside of the small kitchen device.

Even more exciting, though, was when their owner brought out the bag of popcorn kernels. This was truly something to behold, and at first, they lost interest in the machine and went for the bag itself.

After he poured in the kernels and turned on the popcorn-making machine, however, the fun and games came to an end. They were not fans of the noise, especially when the popcorn started popping.

They ran around the room, up the stairs, and at times hid together in safety underneath a nearby couch. From time to time, they would return to investigate before making their escape again.

Overall, they were not too fond of the popcorn-making machine. When the popcorn was finished and available on the table, the otters looked at a few pieces but then ran off to play somewhere else.