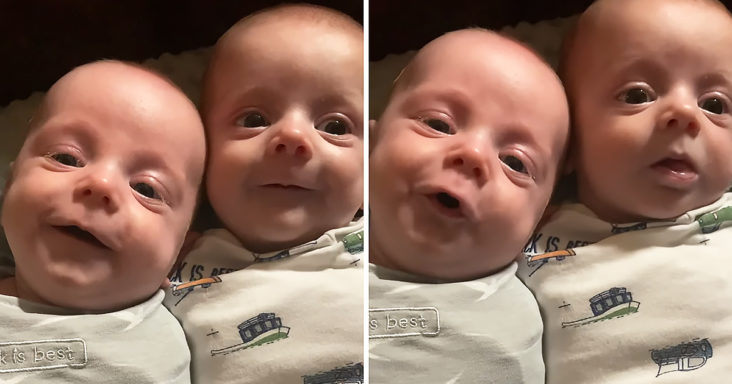 The sight of a happy baby turns a frown upside down. The internet community seems to agree after a video surfaced where a mother sings a hymn to her infant twins. This video is gaining popularity fast and has been shared countless times.

Two beautiful babies listen to their mother sing a hymn in the video, and their reactions are adorable. Covered in smiles with temporary expressions of curiosity, you could find it impossible to watch without grinning from ear to ear.

According to a post from their mother, these babies were just four months old when she recorded the video. She mentioned that they were born prematurely and that their adjusted age is two months.

‘Our sweet baby twins have heard this song since they were in the womb,’ the mother stated in her video post. When she sang this song to the babies, their faces immediately lit up, almost as if they remembered the song from when their mom sang it before birth.

The proud mother first posted the video on Facebook, and since then, it has generated more than 1.6 million views. The caption of the video she posted read: ‘Children will inherit the earth because of their innocence and genuineness.’

The babies certainly steal the show in this heartfelt video, but not to be disregarded is the mother’s voice. Her beautiful soothing voice makes the video even more enjoyable to watch.

Baby videos have the tendency to go viral due to the cuteness factor of these videos. This video is no different, and it leaves the viewer with a certain warmth and feeling of content after watching it.