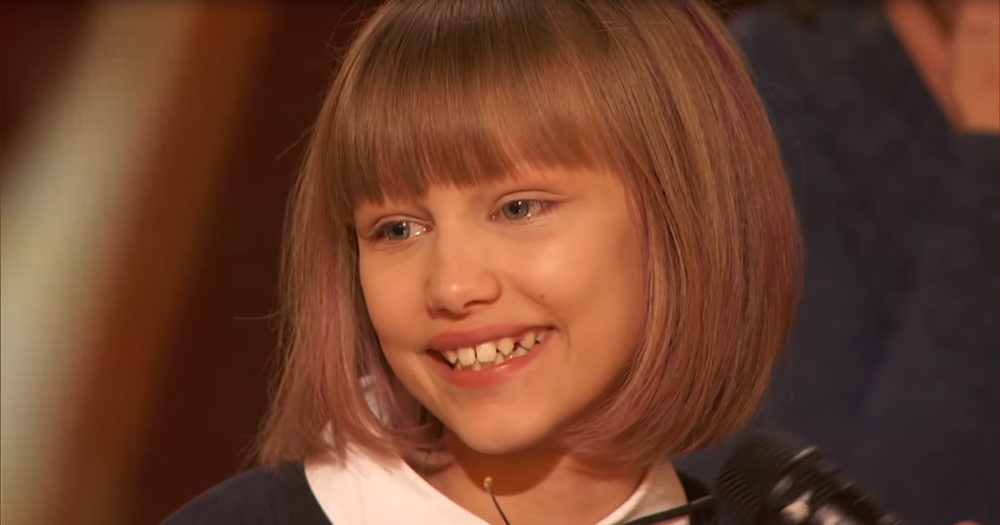 When Suffern, New York middle schooler Grace VanderWaal took the stage on national television to audition for America’s Got Talent, she admitted to the judges that she was hoping for a miracle. Most artists play it safe, performing their own renditions of popular songs. Not so the supercharged Grace.   “What are you going to sing?” asked judge Howie Mandel.

“I’m singing an original,” said the self-assured young woman, to which Simon Cowell skeptically raised an eyebrow. Meanwhile the surprised audience was already cheering her on.

Grace’s energetic, heartfelt song, which she confessed is about herself, is called “I Don’t Know My Name.”  Her raspy voice, somewhere between Bonnie Raitt and Janis Joplin, sent the judges and the audience into a frenzy of cheers, tears and stunned looks as they joyfully clapped along.

Grace’s family, watching from backstage, were also moved to tears watching their pride and joy display her passion for the world.

When the song ended, Grace herself was soon in tears when Mandel hit the show’s famed golden buzzer, sending her forward to competition.  “I think the world is gonna know your name,” said an effusive Howie in response to the song’s ironic title.

“I think you are the next Taylor Swift,” added Simon.  “This girl is special. I’m now annoyed I didn’t press the golden buzzer myself.”

The performance was a big break for Grace, and she went on to win the season, but these magical moments didn’t happen through luck. They happened through Grace’s hard work and determination. She had already begun her singing career by posting youtube videos of herself singing and playing, and by performing at open mic events in her hometown.

Since her star turn on America’s Got Talent she has released an EP, a full-length album, and gone on tour with Imagine Dragons.  She will also star in Disney’s forthcoming movie, Stargirl.

Grace has also appeared at Madison Square Garden, Planet Hollywood in Las Vegas, and in the opening and closing ceremonies of the 2017 Special Olympics Winter Games.  Billboard magazine has twice included her in its annual 21 list of rising young singers.

What are you waiting for? If you haven’t seen and heard this remarkably rare and gifted musical sensation for yourself, don’t miss your chance.