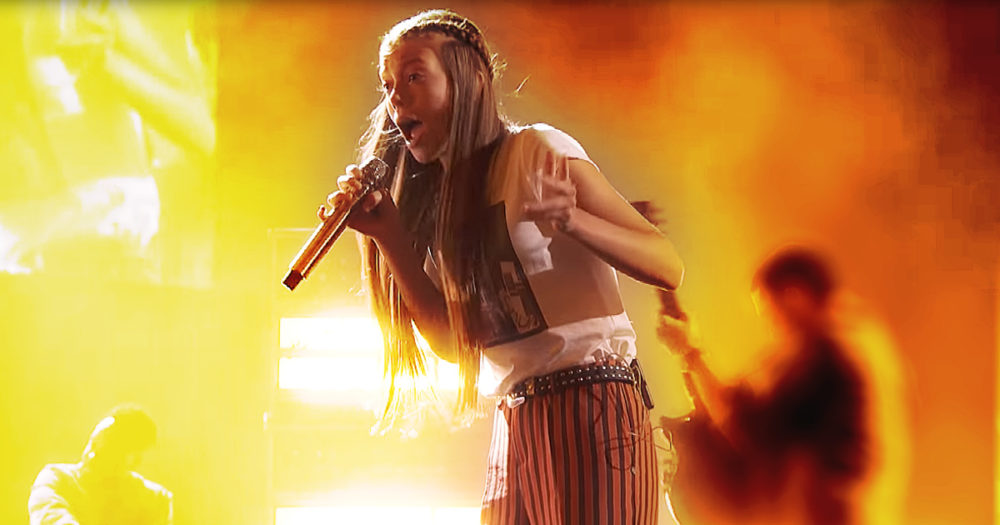 Courtney Hadwin unleashes her wild child yet again on Tuesday’s America’s Got Talent.

The 14-year-old English schoolgirl has risen to become a fan favorite and is currently the predicted winner of the final season. With her vivacious style and a voice with an incredible range, it’s hard to imagine anyone else winning — with the exception of Michael Ketterer. Obviously, the competition is stiff.

After getting Howie Mandel’s Golden Buzzer with a cover of Janis Joplin’s “Hard to Handle” classic, then raising the roof with James Brown’s “Papa’s Got a Brand New Bag,” the shy teenager has delivered consistently.

Her professionalism, poise, and performance are that of a much older person which clearly makes her a prodigy and a star in the making — if not a star already for fame and fortune are already at her doorstep. If the performance you’re about to watch doesn’t convince you of that, you ought to have your head examined.

In the video below, Courtney Hadwin performs her take on the Steppenwolf classic “Born to Be Wild. I don’t need to tell you her performance was outrageously enjoyable. Her reputation already precedes itself at this stage of the competition.

“I can’t sit down!” Mandel said as he excited paced near his chair after her performance. “You were born to be wild. This was wild. You’re amazing… My prediction is you are going to win America’s Got Talent 2018.”

“None of your performances should be perfect because that’s what you’re all about,” Cowell added. “You’re this bundle of excitement, and it’s raw and it’s messy, but that’s what makes you great.”

“I saw you before at the beginning of the show, backstage, shaking like a leaf, then you come on stage and you turn into a maniac,” Cowell exclaimed. “That’s why I absolutely love you, Courtney.”

“You know, you just feel with her that she does whatever she feels like on the night which is what I like about her,” Cowell said. “She’s not a puppet, because that’s boring and she’s exciting.”

As for Howie, the judge who pushed the Golden Buzzer that sent young Courtney directly to the live shows, he was overjoyed by her performance, telling a reporter, “I don’t want to sit down till the finals because I think she’s going to have the confetti going for her one more time. That’s why she’s different than anybody her age, anybody in music right now,” Mandel said. “It’s just, ‘You do you!’ And that’s what I say to Courtney. She’s just amazing.”

Also on this episode of AGT: Tears flow as humble nurse honors Aretha Franklin on ‘America’s Got Talent’