Mason was an elderly but ruggedly handsome feral cat who somehow managed to survive a harsh, hard-knock life out on the mean streets. The old guy had no shortage of battle scars to prove it. When he was brought to the animal shelter, he had an injured paw, several abscessed teeth, and as it turned out advanced kidney disease.

Patching up his paw and dealing with the rotten teeth was easy. But even for a proven survivor like Mason, the kidney disease was going to be an impossible challenge.

After living such a rough-and-tumble life for so many years, Mason had a terrible attitude. Perhaps that had been necessary for his survival. The staff at the shelter found that any attempts to pet him instantly provoked swatting and hissing.

Nearly all feral cats that arrive at animal shelters end up being put to sleep just because they’re essentially wild animals and can rarely be turned into pets. Given Mason’s advanced age, incurable kidney disease, and his feral nature, it would have seemed that he had three significant strikes against him.

Fortunately, foster parents chose to adopt Mason, believing that the old warrior deserved to spend his final months in comfortable, loving surroundings. To everyone’s surprise, he adapted quite well to living in a home. He still didn’t tolerate being petted, but he was happy to be alive: as you’ll see in the video posted below, he and one of his new parents were able to have great fun playing with a cat toy.

But then something unexpected happened when Mason’s foster parents brought a pair of kittens into their home. There was no telling how he was going to react to the new arrivals. But not to worry. It turned out that tough old Mason had a tender side! He became downright maternal, doting tenderly on the little kittens, bringing smiles to everyone’s faces.

Did Mason’s surprising turn for the tender melt your heart? Be sure to let us know in the Facebook comments and don’t forget to like and share! 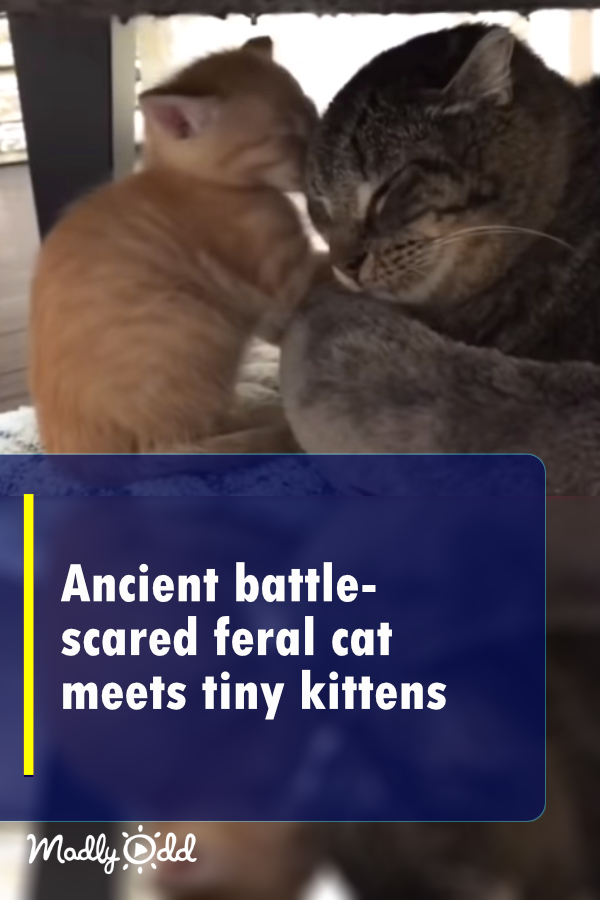