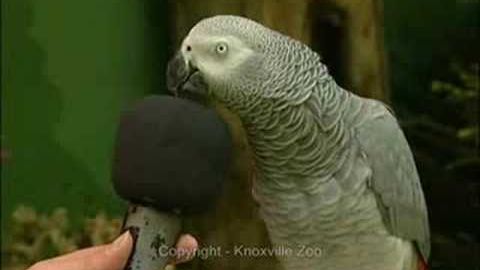 I consider all animals intelligent. They have the ability to read how someone’s feeling, picking up on the “vibe” they are giving off. Many different animals have been jumping through metaphorical hoops to prove they are intelligent. Yet, there is more than one type of intelligence, cognitive, as well as social.

In the same token, Einstein really lives up to her name. Her impressions are well…impressive to say the least. She blows through other’s animals’ sounds, some words, expressions or exaggerations as well as knowing the second parts to common phrases or sentences.

When it comes to understanding, imitating and intelligence, I’m positive this beautiful African Gray ranks high up on the list. If not in intelligence, then definitely on the Foley scale for imitation and mimicking sounds.

The Knoxville Zoo is where Einstein calls home. The Tennessee based avian has a slew of different shows and impressions underneath her belt. Impressing the young and old with her sounds that usually wouldn’t match up.

From dog noises to what someone sounds like after an exercise, this bird is really going places. Yet, when you see her incredible impression, you’ll gasp in shock and awe. I really couldn’t believe it; I thought maybe they had a microphone on someone else who made the noises, but sure enough- not true. This is nothing but one bird’s amazing talents.