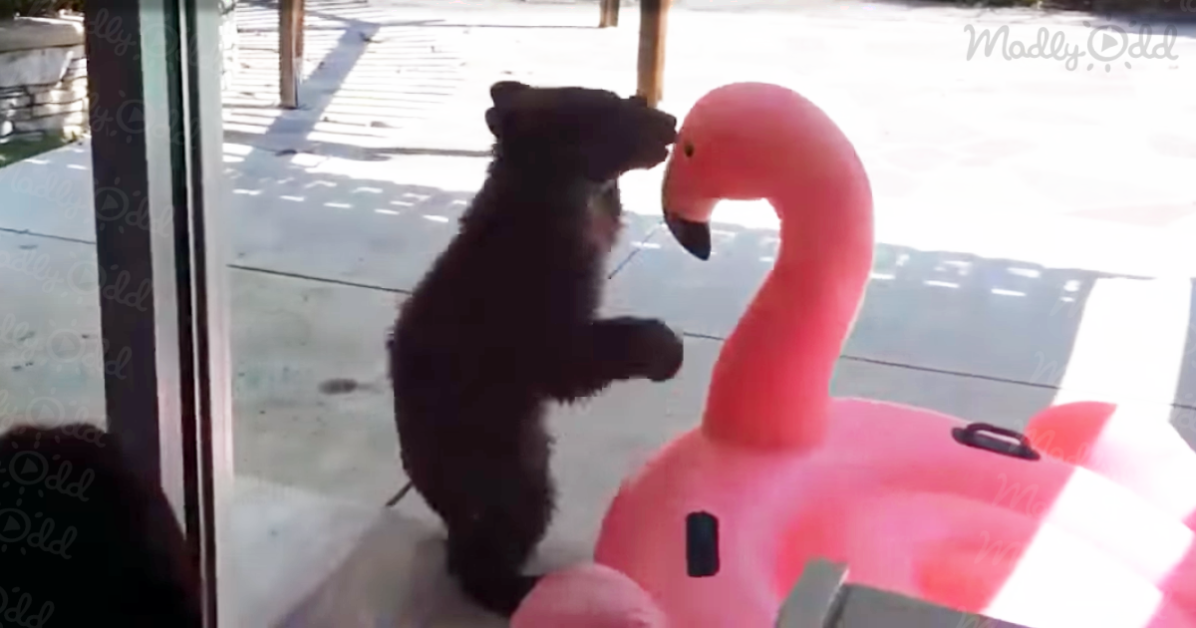 This wasn’t the first time the Liang family of Arcadia, California had a visit from the mama bear and her cub. In April, they’d checked out the backyard swimming pool and dropped by again in June. Now it was September and they were back again. The cub had grown up a lot but was still quite adorable. He’d also been working on his wrestling skills as one hapless flamingo pool float found out.

With the whole family watching from behind the glass patio doors, the curious bear cub was just inches away. When mama bear ambled over, someone yelled, “There’s a photo bomber!” She may have thought it was time to get a move on, but her cub had other plans.

There was a flamingo pool float lying there on the patio and he decided to go wrestle with it. “No no no no no! That’s our flamingo!” The cub merrily got the flamingo float in a headlock and did some biting.

As Kylie Liang, age 6, recalled, “When the bear was wrestling it I tried to say, ‘Bang on the window to get those bears away!’ But then my dad said, ‘Ah, no. I think it’s too late.'” 8-year-old Riley Liang had a matter-of-fact take on the whole thing: “Well I’ve never seen a baby bear wrestle a flamingo. I was kind of surprised to see it do that.”

The inflatable flamingo turned out to be a tougher customer than you might have expected. It took a beating but contrary to everyone’s fears didn’t get popped. Mama bear finally had to insist, standing up on her hind legs to get her cub’s attention. Eric Liang, who recorded the video you’ll find posted below, compared it to a parent trying to get their child to leave a toy store: “Just saying, ‘C’mon let’s go.’ It was just the most adorable thing you’ve ever seen.”