Ever get someone asking you to be your friend?  Chances are somewhere on some part of Facebook you are getting a request from someone you don’t know.

Examples of what makes up fake accounts: 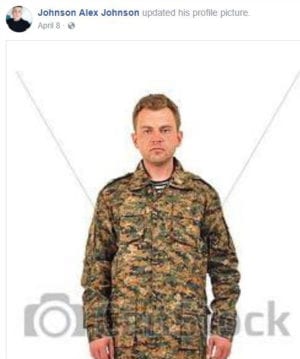 1.    They used an image they stole, which we often find by using TinEye.com. The ones that I love are stolen from stock image sites with a clear copyrighted watermark. As you can see from the image on the right this guy stole one of his profile pictures from a stock image site.  The stock image site’s watermark is clear.  He also claimed to be in the U.S. Army.  However, that striped shirt under his fatigues is common of Russian Miltary.

2.    Despite stealing pictures of someone, there is very little personal information.  While they have a few images, they took from someone else.  The bulk of the images show no picture of themselves.  (for those out there pointing out I have cats for profile pics, I don’t like having my picture taken). They may spam share posts from other pages to make their page look like that of a real person.  But you are not going to see a lot of pictures of their own.

3.    They have a first name as the last name. Like, say Joseph John, or Steven Jennifer.  A few weeks ago, I encountered a Williams John.  We also get fake accounts like Page Appeal and Facebook Support pretending to be with FB trying to get me to click on links to hijack our accounts. 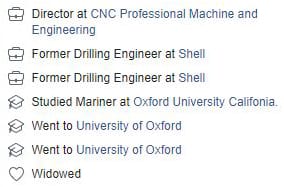 4.    Career: Oil business, military, finance, retired. Mostly trying to show that they have or came from a high paying career. Sometimes the show pictures they snatched from real-estate sites of houses.  Which you can use tineye.com to find out where they stole it from.

6.    Accounts were often created minutes if not hours before trying to “friend” people. There are older accounts.  But these are usually older accounts that used bad passwords and/or

7.    They have the option to send them money on their profile.

8.    Friends:  They either have very few friends, or Lots of friends from another country, or lots of friends of a particular gender around a certain age (the people that fell for the scam). 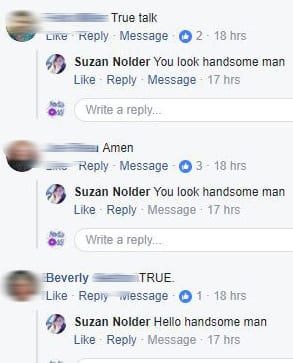 9.    They comment on multiple people’s comments.  They will tell you things such as how beautiful you are or some other compliment. If they don’t ask for a friend request in the first reply to your comment, they create a second reply that asks you to add them/be their friend/accept their friend request.

10.    They don’t quite have a handle on the English language.  You see the usage of terms that a lot of people don’t use.  One example is guys calling someone dear.  They may not even understand that Beverly is not a man’s name. Or Benjamin (that is me) is not a female name.

Why are these people contacting you?

There are a few different reasons.  The first and most likely reason has to do with point 7.  The option to send money is on their profile.  Some of these pages end up having a lot of people complain about money being sent only to figure later out the account was a fake.

Something that does not happen with Madlyodd.com but other pages in the Reactcore group is fake accounts that were created to push an agenda.  In some case trying to promote positive reviews on a product to try and counter the real negative reviews.  Others just to drive a company’s product, often on an unrelated topic.  Like say one of our posts on a cute puppy doing something funny, they want you to click on a link that will tell you how to make money from home. Some are even trying to push a political agenda.

Others are purely destructive, and they target products, people, groups…… for the pure purpose to bully or intimidate.

Other scams to avoid:

If you are a fan of our page Madlyodd.com, then you know that it is about stories of hope, redemption, wonder, and animals.  We are not about dating, some get rich quick scheme, and what other scams these individuals may think up.

What you can do to combat this menace.

Any time you find someone who tries to friend you or someone else in the comment section (or chat you up/get to know you better).

1.    To the right of the offending comment, there is a not so visible ‘…’. You can get to it by moving your mouse near that area.

2.    After that you have some steps to take that will get the comment(s) and the fake account removed off of Facebook.  You will select “Hide Comment”.

You will select “It’s spam” and hit continue.

5.    After you push ‘continue’ you get the final screen.  Choose the first three options. Do not contact them. 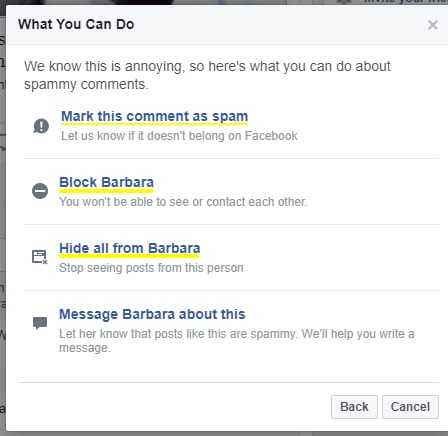 For Tablet and Cellphone users: 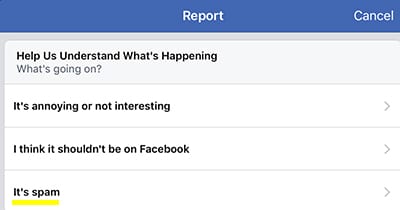 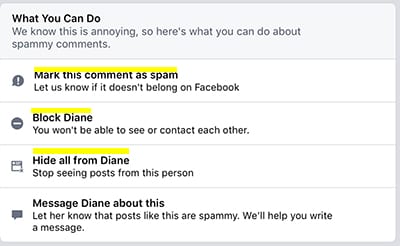 The last two ‘block’ and ‘hide’ all will tell Facebook that you are serious about this being a fake account.  Plus, you will not see any content from them anymore.

Do you know all of the people on your friends’ list? Did you friend anyone just because they sent you a friend request?

Chances are if you have 200 or more you may not know all of them.  All of these people that you do not know will clutter your news feed.   Keeping you from seeing your actual friends posts not to mention our posts.

I find it surprising that Facebook has not taken steps to counter these fake accounts.  Especially when they have software that will not allow us to advertise anything with too much text in the image.   What will get Facebook to change?  As my grandmother used to say the squeaky wheel gets the oil.  By which I mean if enough people report these fake accounts, it will force Facebook to consider other measures than just letting people report the fraudulent accounts.  Otherwise, they will get overwhelmed with dealing with all these requests to close down counterfeit accounts.