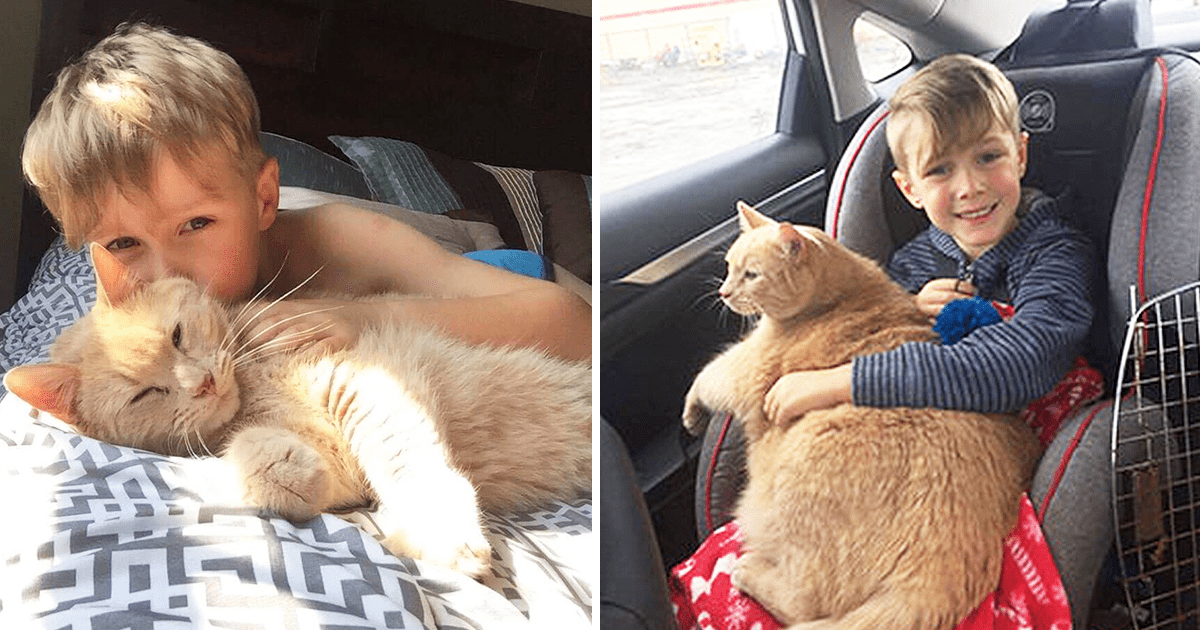 Every pet deserves a loving home, no matter how old it is and no matter whether it’s looking its best or not. However, when most people go to an animal shelter, they’re generally thinking in terms of adopting a kitten or puppy and the cuter, the better. This is completely understandable, but unfortunately it means that older or physically “defective” animals can find themselves waiting a long, long time for a forever home.

One mom had a nice surprise for her son Easton. She was going to take him to the local animal shelter and let him bring home whatever animal he wanted. The were plenty of cute little kittens and puppies at the shelter — a lot of people would have found it nearly impossible to choose. Far from being overwhelmed by kitten or puppy choices, Easton was immediately drawn to one of the older cats, an immense 10 year-old orange tabby ironically named Tiny.

As it happened, Tiny’s sister Trinity was also available for adoption, but since the two feline siblings didn’t get along very well, the shelter had no problem with them going to different homes. So Easton and his mom did the paperwork, got Tiny into a carrier, and headed for home.

Cats are often a bit… high strung… and when they’re brought to a new residence, it’s often a frightening and stressful experience. The curious thing is that when Tiny was let out of his carrier, he didn’t run to the nearest hiding place. Instead, he immediately went over to Easton, hopped up on his lap and enjoyed some cuddle time with his new best friend. Easton’s mom sent the animal shelter a photo of the two and it’s gotten thousands and thousands of likes since they posted it on Facebook.

Do you think Easton and Tiny are perfect for each other? We’d love to hear from you in the comments at Facebook. Be sure to like and share: let the world know that what matters is what’s on the inside!