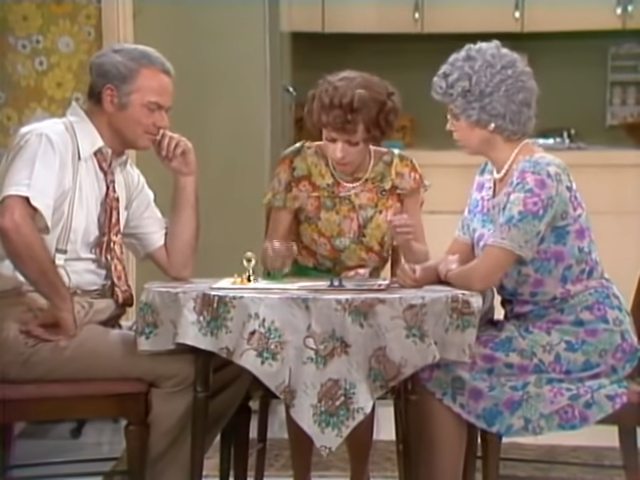 It may be game night for Ed, Eunice, and Mama, but when the competition heats up, the laughs start coming in this brilliant FULL-LENGTH sketch from “The Carol Burnett Show” which aired during the show’s eighth season (Episode 9) in 1974. For viewers at home, it was a  Saturday night bursting with belly laughs.

Unlike Vicki’s show “Mama’s Family, which came later, the main character of “The Family” sketches is Eunice. “The Family” sketches revolve around the loud, quarrelsome, yet very relatable and funny couple known as Eunice and Ed. Of course, while we’re on the subject, let’s not forget Eunice’s cantankerous, quirky live-in visitor who adds to the laughter and drama, that being Eunice’s senior mother… Mama from Mama’s Family (to come later). One of the most brilliant comedic casts ever. Unfortunately, Mama isn’t fictional! I’m pretty sure I know her. 😉 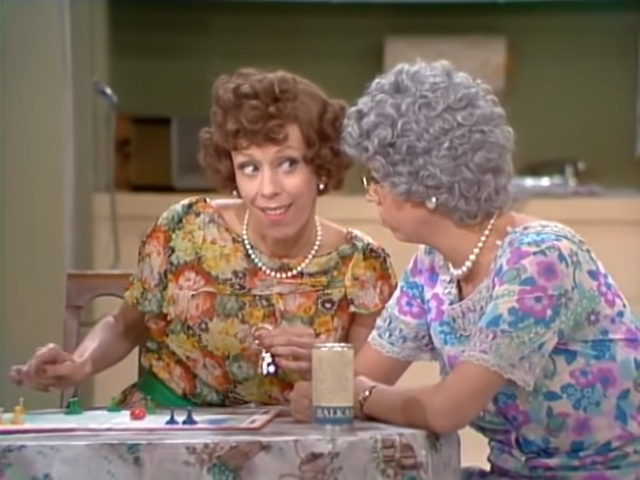 While we love how Vicki Lawrence did “Mama” (and we love her even more in “Mama’s Family,”) we have to give a lot of credit to Carol Burnett for her portrayal Eunice Higgins – the very fiery, stormy, effervescent and hotheaded daughter of Mama. She’s happy and cheerful one moment and totally off her rocker the next. I love how she seemingly never changes the same olive green-themed outfit. Hey, we all have our favorite clothes we like to wear around the house, right? But I digress.

Of course, we have to give a shout-out to the irascible Harvey Korman who plays the goofy and crazy son-in-law of Mama. He does not have much patience for his wife for Mama when they push his buttons, “I’ll tell you what.” Gotta love him. I think we all have an uncle like him somewhere in the family tree.

This rarely seen clip you’re about to watch has evoked a lot of comments from Carol Burnett fans. As one succinctly put it, “Carol is my heart & soul, but Vicki was just as amazing. She was the “junior” talent on that team, but she could deliver the best, bloodcurdling lines and stay in character. God, I wish our culture was geared toward cultivating superb, wry comedy like this… If comics were encouraged to write and perform like this, it would make people happier, and they need that. Days have gone by. Days totally went by.” We could not agree more.

You’re going to enjoy watching Carol Burnett, Harvey Korman, and Vicki Lawrence in this marvelous clip because not only is the video quality fantastic for the period, but it’s also a full fourteen minutes long. But don’t worry, the comedy starts from the moment you begin watching. Enjoy and if you liked it, pass this video along to a friend when you’re done so they can enjoy it, too.