Dean Martin and Ricky Nelson were iconic American actors if ever there was one. Another iconic actor also appears in this film, the legendary John Wayne.

He’s best known for the westerns he starred in, although he made movies in a number of genres. In fact, his first screen appearance was as an extra in a 1926 romantic movie set in 17th century France! After starring in some B-movies, Wayne had his big breakthrough in 1939 with the enormously successful John Ford movie “Stagecoach.”

Numerous roles in major movies followed in the 1950s and ’60. His performance in “True Grit” won Wayne an Oscar for best actor in 1969.

Wayne plays a sheriff, of course, while Martin is his drunken deputy and friend. Because leading members of the cast included a crooner and a teen idol, several musical numbers were written into the script.

“Rio Bravo” has gradually come to be held in high regard by both fans and critics. It’s been added to the National Film Registry, an honor bestowed on particularly important films.

In a scene set in the town’s jail, Dean Martin gets a song going. He’s joined by Ricky Nelson on guitar and Walter Brennan on harmonica.

They put on such a good show that even the tough, stony-faced John Wayne can’t help but crack a smile. Oddly enough, Wayne himself played a singing cowboy early in his career as the star of 1933’s “Riders of Destiny.”

We’ve posted a video of this unexpected musical scene from “Rio Bravo.” You’ll see Martin leading with “My Rifle, My Pony, and Me” followed by Nelson singing “Get Along Home, Cindy.” 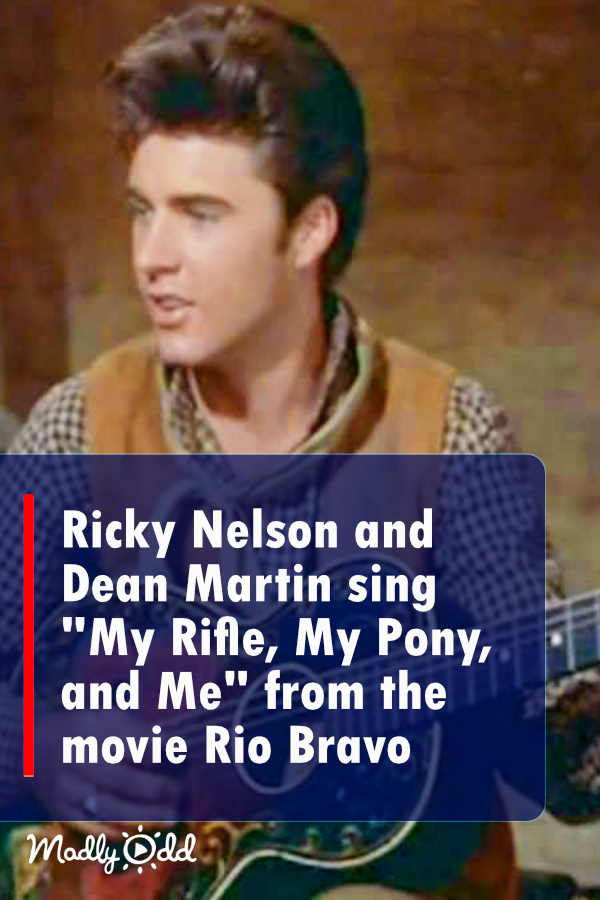