Who doesn’t remember the old cartoon “The Roadrunner” where our hero is always being chased by the hapless “Coyote” which of course is always destined to lose? The Acme Company that supply an assortment of goodies for him to use against his feathered-foe. The Roadrunner always outsmarted the Coyote with his brains and his whirlwind speed, but did you know that it’s the ostrich, not the roadrunner that is the world fastest non-flying-bird?

The ostrich is the world’s largest bird, and by no surprise, lays the largest eggs. It can run up to 43-miles-per-hour, and has been known to kill not only people, but such predators as lions with a blow from it powerful legs and razor sharp claws. Theses amazing birds can grow up to 9-foot-tall and weigh an incredible 350-pounds, and they have an average lifespan of 40-45 years. Now I’m guessing that you wouldn’t what to come across one of these massive birds, unless it was the other side of a 15-foot-high-fence, but what if you are innocently riding your bicycle when one appears?

South Africa holds an annual event called the “Cape Town Cycle Tour” one of the biggest cycling events held in the world. The event can attract up to as many as 35,000 cyclists, and is run over a 68-mile-long coarse. It was the first cycling event outside of Europe to be included in the “Union Cycliste Internationale’s Golden Bike Series” and is the world’s largest individually times cycle race. 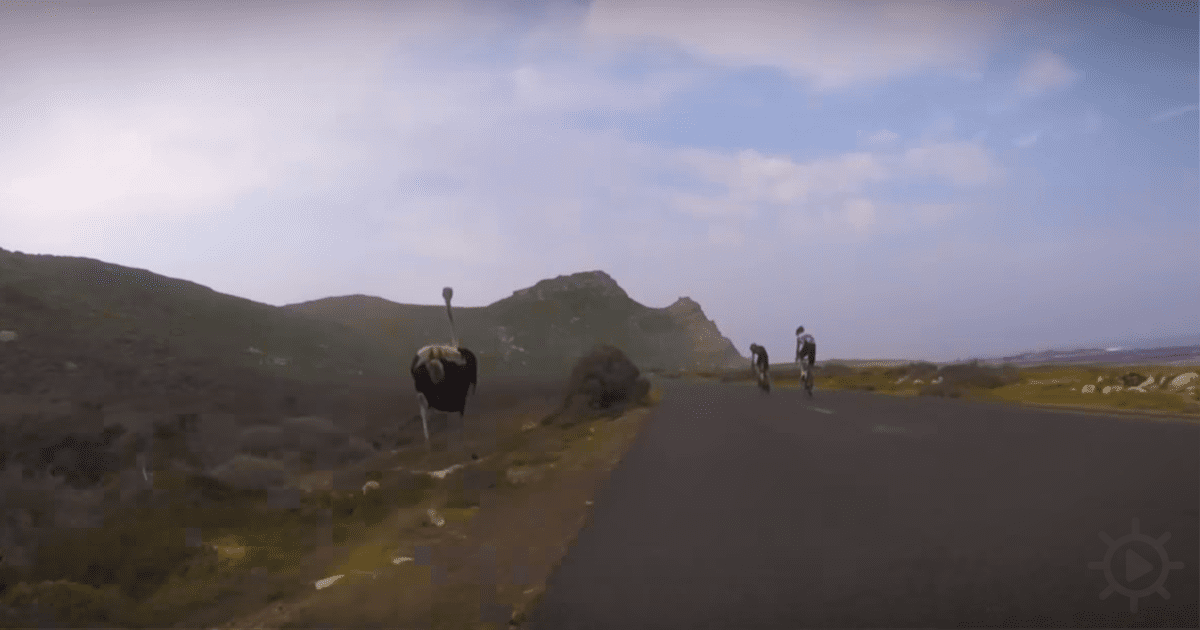 In the clip below, a group of cyclists preparing for this event decided to go on a warm-up-ride of a 130 Km to the Cape of Good Hope. The picturesque road winds along the ocean and is usually very quiet and deserted. On this day as the group were enjoying the scenery they were surprised by a rather large visitor running after them. At first the riders are having a bit of fun with the bird but then realize that maybe this is a little more hazardous than originally thought.

It is amazing just how easy it was for the ostrich to keep up with the group, and it was soon becoming clear that maybe they should all speed up a little to try and out-run this oversized-roadrunner-on-a-mission. As you watch this clip you can’t help but have a giggle to the reaction from their back-up-crew. As soon as big-bird comes into view, the support crew immediately start laughing. As dangerous as it seems, it is very funny to watch.

Fortunately for the brave cyclists, the ostrich became bored with the chase and headed into the bush leaving our intrepid team to enjoy the rest of their ride, hopefully without the intrusion of another busybody-bird-barging-in on their all-important training session.