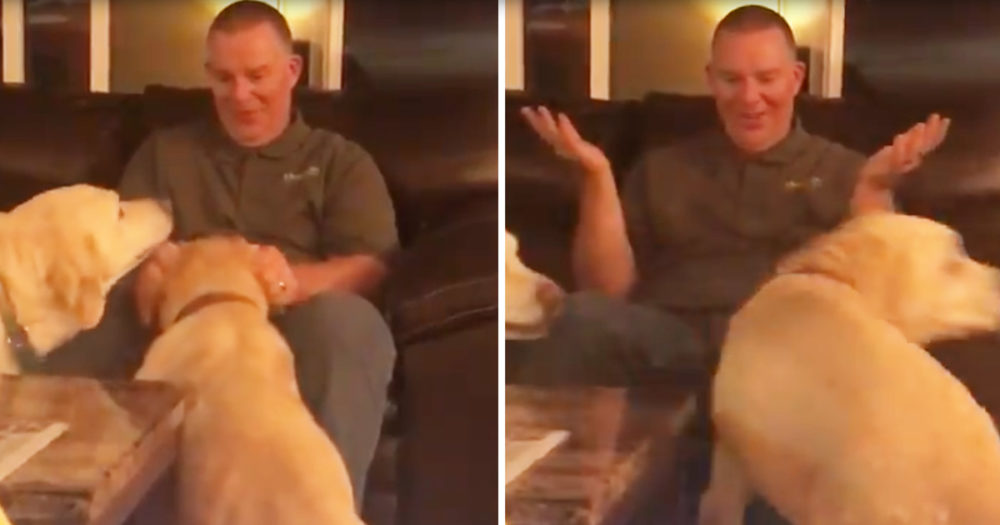 The artist Moby is quoted as saying “Dogs have boundless enthusiasm but no sense of shame. I should have a dog as a life coach”. He shouldn’t look further than a Golden Lab named Cache.

Dogs are often cited as being man’s best friend but you have to wonder if sometimes they are getting a bit too close, especially when they start exhibiting signs of envy, or succumbing to the placebo effect!

In this quaint video posted by Chloe Copley of her two Golden Labradors receiving ear drops you quickly realize the second dog, Cache, has only nosed in on the act as he wants the same attention and treatment the first Lab has received, namely drops of medicine squirted into his ears followed by a healthy ear massage. What dog would not welcome this sort of attention?

When finished Cache bounces away looking happy as Larry, one very satisfied Labrador genuinely pleased to be “on the mend” after having his medicine and treatment. Who could argue the placebo effect does not work for animals, or at the least has given this Lab one big endorphin boost!

Certainly, Cache and Tod were a huge hit with the internet. One viewer said,  “I’m in my room crying this is so cute”. We are complete suckers for animals exhibiting jealousy, or any other human trait. However, is it as simple as this or has Cache just invested time and cuteness in getting Tod where he wants him?

Another viewer spotted this and commented “Ahhhhh that’s so nice!! Well trained human!!”. I’ve lived with dogs for most of my life and, whilst Winston Churchill quoted “Dogs look up at us, cats look down at us, pigs treat as equals” I’ve always suspected dogs have just been playing us all this time. Why don’t you check out the video for yourself and see if you think Cache just has Tod nicely wound around his little paw

my dog has ear medicine she needs and the other one also thinks he needs it too.. nobody has the heart to tell him it’s pretend.. pic.twitter.com/Vshe7dhl3b