Traditionally, in society, it has always been that the father goes out to be the breadwinner and the mother stays at home looking after the kids and the household. Thankfully, today, this archaic belief is changing as more and more women concentrate on their own careers and it’s given way to the rise of the househusband. But it’s not just human dads that are now tasked with the babysitting duties! And it can be particularly challenging when you’ve also got a handicap.

Take Henry here, a tabby cat living in Ketchikan, Alaska. He’s not like other cats as he can’t move in the same way they can, running, pouncing or sneaking around as the animals are often want to do. You see, Henry was born with feline cerebellar hypoplasia. If that’s something of a mouthful, it’s also known as “wobbly kitten syndrome” and basically means his motor skills are not as developed as a normal, healthy cat. He’s unsteady on his feet and lacks coordination.

However, that doesn’t stop Henry from having strong paternal instincts, and when his human mom brought home an abandoned litter of kittens, Henry knew it was time to step up to the plate! The tiny moggies were only 3-weeks-old when Heather Muench decided to adopt them from the Ketchikan Humane Society. They had been brought there by school children who discovered them abandoned in a cardboard box.

Now it’s Henry’s turn to show them the love they deserve as he nurtures the little rascals in a loving environment. He’s been known to lick them for hours, cleaning each and every one of them, which must really take it out of the new dad – because there are six in total!

Henry has been looking after his new charges round the clock, providing maternal and paternal care in the absence of a mommy cat! And he’s not slowing down yet, becoming the daddy cat at the shelter and looking after any unwanted kittens that come his way. In spite of his own struggles through life, Henry is proving a natural at parenthood!

And Heather is convinced this is going to help him and his chances of survival in the long run too. Having this “project” will keep his mind and body active and it can only be a good thing in stimulating Henry to keep fighting himself. So don’t miss this adorable video of Henry the hero tabby cat doing what he does best – looking after the kids! 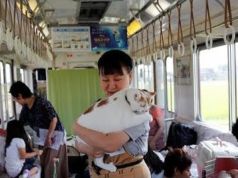