Dogs can be trained to do some amazing things: herd sheep, help with hunting, sniff for contraband, find people trapped under rubble, serve as therapy dogs, and much more. Of course, dogs can also learn fun tricks like shaking hands. How about following an entire dance routine? Can a dog do that? The answer is a resounding yes: a young woman and her Newfoundland proved it at a dog show several years ago.

The Newfoundland dog is the quintessential working dog, originally bred to help the island’s fishermen. A type of mastiff, the Newfoundland can boast of strong legs, a large head, and big bones. And speaking of big, these dogs are definitely in the “giant” category, with males weighing 150 to 175 pounds. They’re calm and intelligent while also being utterly courageous. The breed’s strength is legendary and so is its ability to swim and perform water rescues. But for all their derring-do, Newfoundlands have a sweet, gentle disposition and make such good therapy dogs that they’re known as “the nanny dog.”

In 2012, this Newfoundland and his human showed off their dance routine at the Eurasia dog show, an event held annually in Moscow. Their “dance of the doll and dog” is accompanied by “Head Over Heels,” a 1981 hit by the Swedish pop group ABBA.

The young woman is dressed in a doll-like outfit (including a giant bow on her back) and her moves are often robotic, kind of like those a doll might make if it could dance. But what’s really remarkable is the great job her Newfoundland does making all the right steps. Clearly a lot of work — and probably a huge quantity of treats! — went into preparing for the event.

Impressed by this dogs ability to remember and perform an entire dance routine? Let us know in the comments below the video. Be sure to like and share, too! 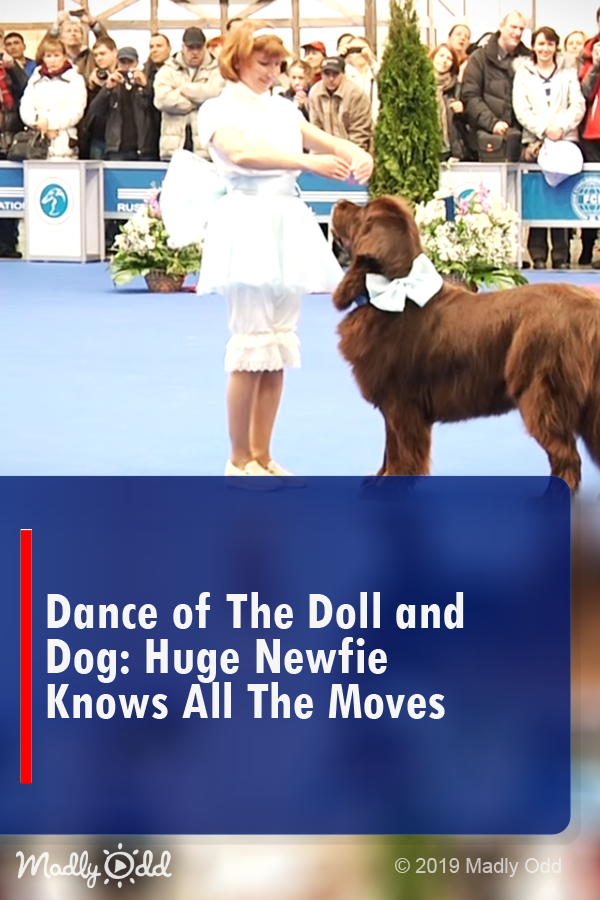