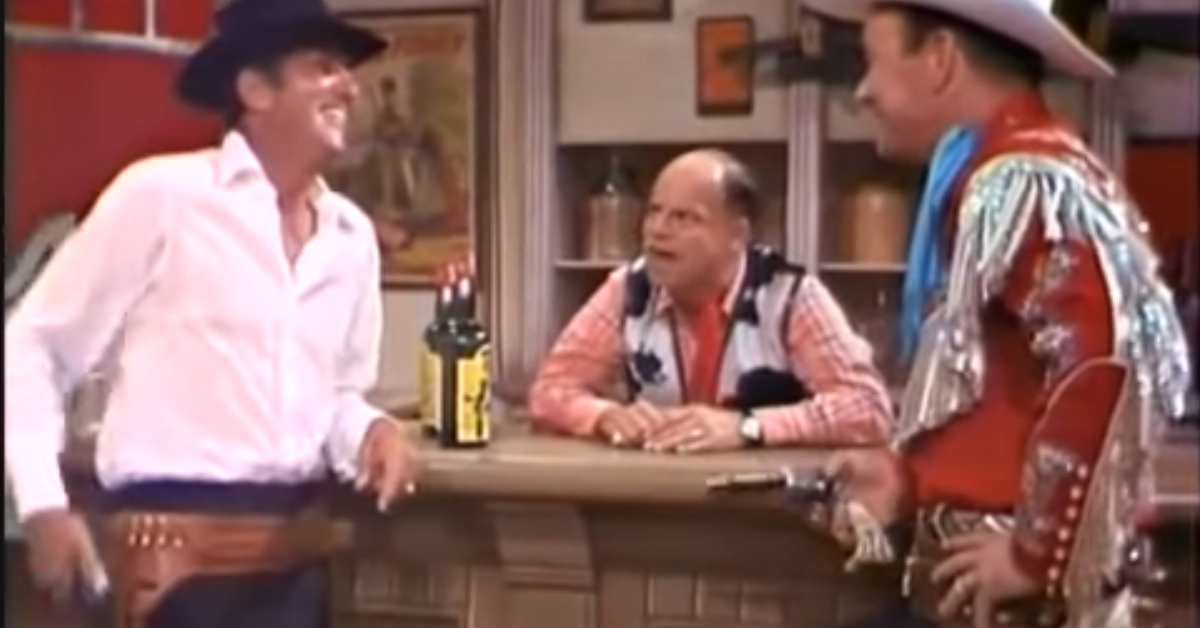 Don Rickles and Dean Martin Can’t Keep a Straight Face in This Sketch—and Neither Will You!

The Dean Martin Show was a big part of TV’s golden age, right along with programs like The Danny Kaye Show, The Carol Burnett Show and Laugh-In.

Who can forget seeing the King of Cool laughing it up with stars like Sammy Davis, Jr., Jimmy Stewart, Kay Medford, Jonathan Winters, John Wayne and a host of other special guests.

And what do you do when your guest star is the comedically corrosive Don Rickles?  Martin’s writers came up with the perfect sketch for him, Dino, Roy Rogers and Dale Evans, but it quickly devolved into a series of ad libs and flubbed cue card readings that will leave you howling right along with them.

“You’ve got five minutes to get out of town,” sheriff Roy tells Dean.

“I can’t do that, sheriff. You know the freeways are murder at this hour,” says the Oklahoma Kid in a hilarious comeback.

It’s crystal clear that both men are struggling to remember their lines and spot their cue cards. Behind them Don Rickles can’t help but roll his famous bug eyes.  “Forty-million shows and I get booked on a bomb!”

When it came to Dean Martin struggling with cue cards, it was no act.  He was originally against doing the series because he already had a busy schedule with his movie and nightclub careers. When the TV network offered him his own show, he intentionally made high salary demands.

He also told them he wouldn’t show up to rehearse and would only read from cue cards, hoping to stop the project dead in its tracks.  When the network agreed to his unbelievable demands, he unwillingly took the job.  “They went for it, so now I have to do it,” he told his daughter Deanna Martin.

“When you turn Rickles loose, anything goes…It’s a riot!” commented on fan of this sidesplitting video.

“This is so funny it hurts,” said another tickled viewer.  “Miss this level of comedy and originality. RIP to the legends.”

Are you ready for a gut-busting romp through the Old West as only The Dean Martin Show can deliver?  Watch the video below and share it with your loved ones.  Enjoy!