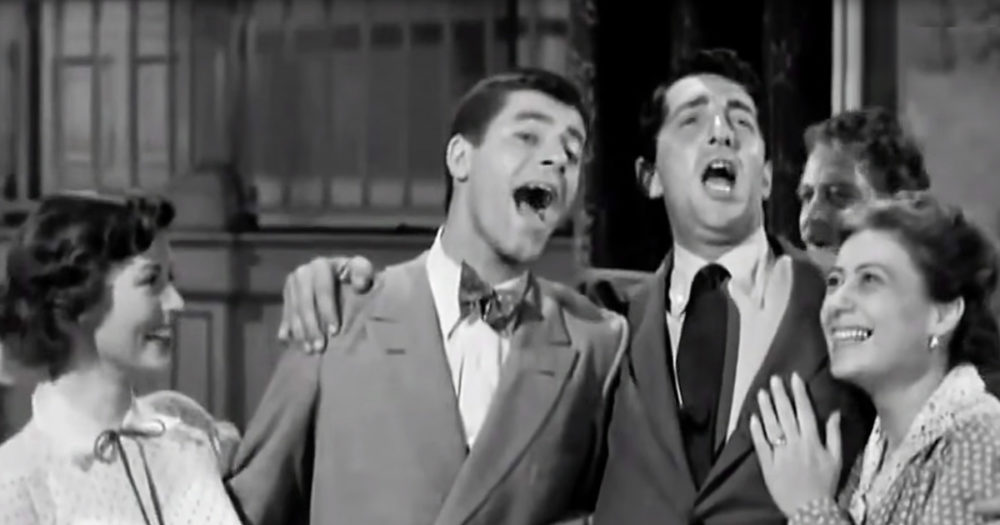 Dean Martin and Jerry Lewis were a great duo. Not only in acting and sketch comedy but, in singing as well. One of their famous musical collaborations was on the song “Amore.” If you’ve ever seen their movie The Caddy you will know the song!

The video clip starts with the mother begging Martin to sing for her. Even though he protested, he gives in and starts singing. Others joined in with instruments, and the familiar melody begins. I believe every American knows at least some of the lyrics to this song.

Jerry Lewis adds that comedic touch to this song. We hear him adding his famous voice to the mix and humor as well. The pair put on quite the show together while singing this song. Even in a song about feelings of love, the two can make everyone laugh. The song comes to an end with everyone dancing, clapping, and cheering. It became an instant classic for the ages.

Someone who recently viewed this video said, “This is the perfect song to listen to when eating Italian food.” I think I’d have to agree. I know when I think of this song, I think of the cartoon movie “Lady and the Tramp.” In that movie, this song is played while to dogs lovingly share a plate of spaghetti!

Another viewer said, “This warms my heart. I love Dean Martin and Jerry Lewis so much! I’ve seen all their movies and Colgate Comedy Hour episodes.” These two have a long television history together, and this song was just one thing that immortalized them. After watching this video, I’m sure you’ll feel the same wave of nostalgia that so many others have had.

Leave a comment on the video to let everyone know your feelings about these two great men. That’s Amore!