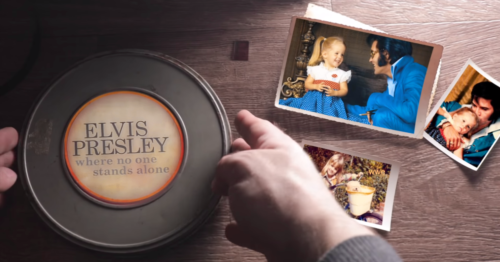 “I absolutely love this duet. Lisa Marie has a fantastic voice. Her father would be very proud.”

Elvis Presley is loved the world round and generation after generation of fans still feel the loss of the King of Rock and Roll. That loss is no more powerful for anyone than Lisa Marie Presley, his daughter.

This song gives Lisa the opportunity to perform a duet with her beloved father. Grab a tissue, because it’s a moving experience to watch this video. The powerful lyrics of this gospel tune that was a favorite of her father, are orchestrated beautifully. Touching home movie footage, concert performances, and photos, along with Lisa Marie’s Studio Performance merge into a stunning visual accompaniment.

In a review by David Troedson from the Official Elvis Fan Club, Troedson says, “For the most part, musically ‘Where No One Stands Alone’ is by far closer to what Elvis recorded than the recent ‘Royal Philharmonic Orchestra’ (RPO) releases (‘If I Can Dream’ and ‘The Wonder Of You’) – I think by way of example I can safely say that if you simply liked those (I loved them!!) you will LOVE this new album.

And if you did not like them there is a far greater chance you will like this new release, but those that have a closed ‘don’t touch’ Elvis’ recordings attitude probably will not (because they will not even give it a go). Of course with people liking different things, not everyone is going to like a different sound, but going by the success of both ‘If I Can Dream’ and ‘The Wonder Of You’ there are obviously plenty of fans that do!”

This new Elvis compilation celebrating the singer’s love of gospel music, “Where No One Stands Alone,” features a special, reimagined duet with his daughter, Lisa Marie Presley, as the album’s title track.

The 14 tracks on “Where No One Stands Alone” take Presley’s gospel recordings, largely drawn from his albums “How Great Thou Art” (1967) and “He Touched Me” (1972), and combine them with new instrumentation and vocals from singers who collaborated with Presley over the course of his life, including Darlene Love and Cissy Houston.

Most notably, the title track features Lisa Marie Presley duetting with her father’s vocals from a song that originally came out in 1967.

“It was a very powerful and moving experience to sing with my father,” Lisa Marie wrote in the album’s liner notes. “The lyrics speak to me and touch my soul. I’m certain that the lyrics spoke to my father in much the same way.”

In the notes, Lisa Marie goes on to share her experiences with her father’s love of gospel music. “This was his favorite genre – no question about it,” she wrote. “He seemed to be at his most passionate, and at peace while singing gospel. He would truly come alive – whether he was singing just for himself and me at home, or on stage in front of thousands of fans.”

Elvis fans have taken to YouTube to share, “Absolutely stunning…Lisa sounds great with her dad…it blew me away.”

“I absolutely love this duet. Lisa Marie has a fantastic voice. Her father would be very proud,” commented another adoring fan.

I want to hear what you think of this touching duet! What would King think of this video, tell us in the comments below — and share this on your Facebook feed so others can enjoy it.