Have you heard the one about the “Puggle” and the hot tub? No, well here’s a story for you.

Firstly, I had better explain what a “Puggle” is. It seems that back in the 1990’s a breeder decided to cross a “Pug” with a “Beagle” to see what would happen. These cute little dogs have the “Pug” wrinkles but the snout and ears of a “Beagle”. Some people think that they look like miniature “Mastiffs” and having once owned a mastiff I can see where the comparisons come from.

Now anybody who has had experience with dogs will know that both the Pug and Beagle breads are a little hard to train. Puggle’s are a smart dog, so smart in fact, that if they don’t want to do something, they don’t, simple. Having these two breeds of dog combined into one makes for one very stubborn mutt. They are referred to as “designer dogs” because they have been interbred on purpose, and as such these designer dogs like nothing more than being pampered.

This brings us to the hot tub part of the story. There is nothing like a warm hot tub on a freezing day. It may be cold outside, but in that tub it is nice and warm. The bubbles are caressing your body with their massaging skills and the steam is rising as the outside temperature drops just a little more. Even in summer when the temperature in the tub is turned down they are still a great way to relax and relieve the pressures of the day.

“Cuzzie” the cute Puggle is a rescue dog that was saved from what could have been a rather premature end. His mom has rescued a number of dogs and is obviously very much in love with this puddle-loving-Puggle, so much so that when he was first brought home he loved to play on the pool inflatables and just laze around enjoying the sunshine, and being treated like any “Designer dog” should be. Then one fateful day this carefree-canine discovered the pleasures of the HOT TUB.

He just loves pressing up against the jets with his back says his dad, Danny Sam. “He will hop in and press against the jet and croon with pleasure”. He manages to wiggle around to get the full effect of the jet on his back, such relief from a hard days ………..sleep.

Danny Sam had told all of his friends about Cuzzie’s hot-tub-exploits, but nobody would believe him…….a Puggle in a hot tub, they all said… yeah sure, so Danny Sam decided to make a video of his pampered pooch to show the world just what pleasure one lucky puppy can get out of five minutes in the water. 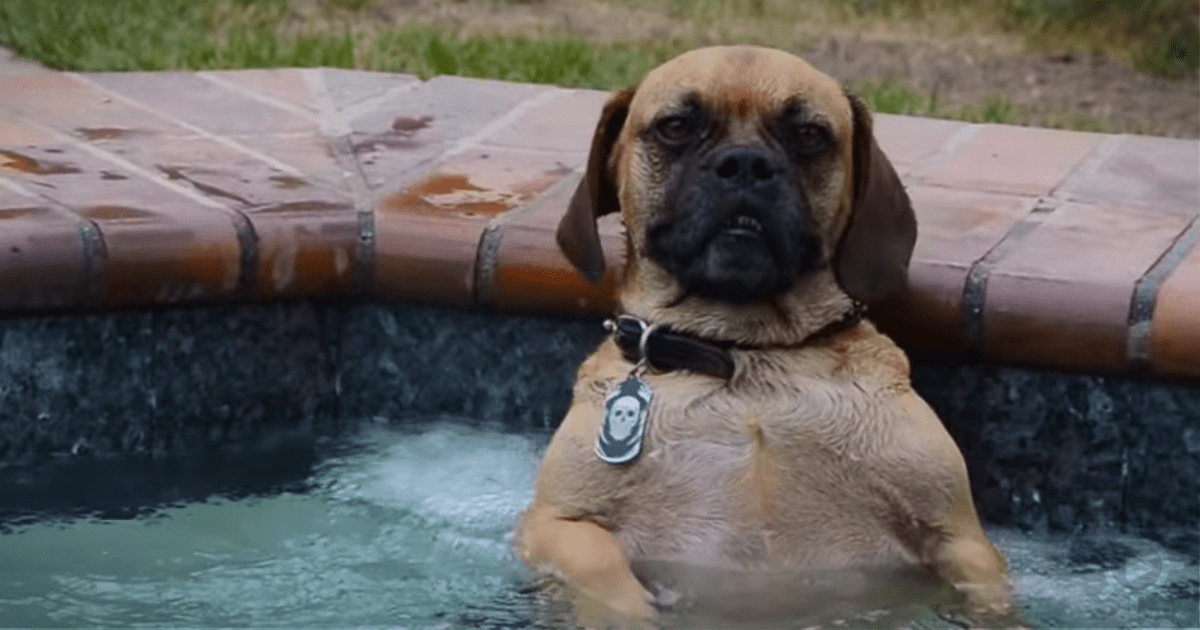 Click on the link below and see the raptures on the face of this Puggle-come-person as he soaks up the pleasures of life.