Dominyk Lever was fishing for rainbow trout on the Apple Creek in Wooster, Ohio when he had an encounter with a trio of ridiculously cute baby raccoons. As it happens, he was a long way from home (Tanzania, in east Africa) so it was nice that he would bring back memories of a quintessentially American animal.

It was the little chirping sounds that first tipped Dominyk off to his visitors. The three young raccoons swam right up to his boat. They followed him to shore and as he recalled, “It was the middle of the day and I looked down at my feet to see the three raccoons approaching me and clamoring to climb up my legs, which I let them do.” After shimmying up his leg, the raccoons made their way up onto his shoulders and gave his ears a licking!

Another fisherman happened on Dominyk and his masked friends. He couldn’t help but toss them a fish. When Dominyk came back a couple days later, he found that the man had built a wooden shelter for the raccoons. Later, there was an update: “I’ve communicated with him since, and he tells me they are doing well and getting more independent by the day and spending less time around people, which is a good sign.”

Suzanne MacDonald, a wildlife expert interviewed by National Geographic thinks these young raccoons were likely orphans, but old enough that they could fend for themselves. But without their mother, “They will adopt anybody. They love climbing on people.” She thinks to build a shelter and checking up on them was exactly the right thing to do. Cut though they are, she doesn’t recommend trying to adopt raccoons. They’re hard to train and “once they are out of that baby stage, they will destroy your house.”

Check out the video and let us know what you thought about these masked cuties in the comments section below. Be sure to like and share. 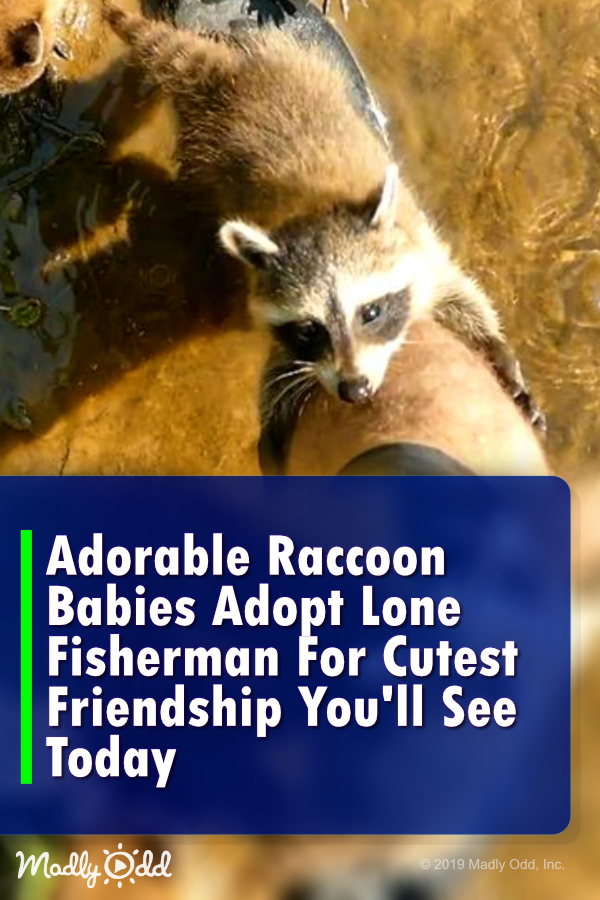