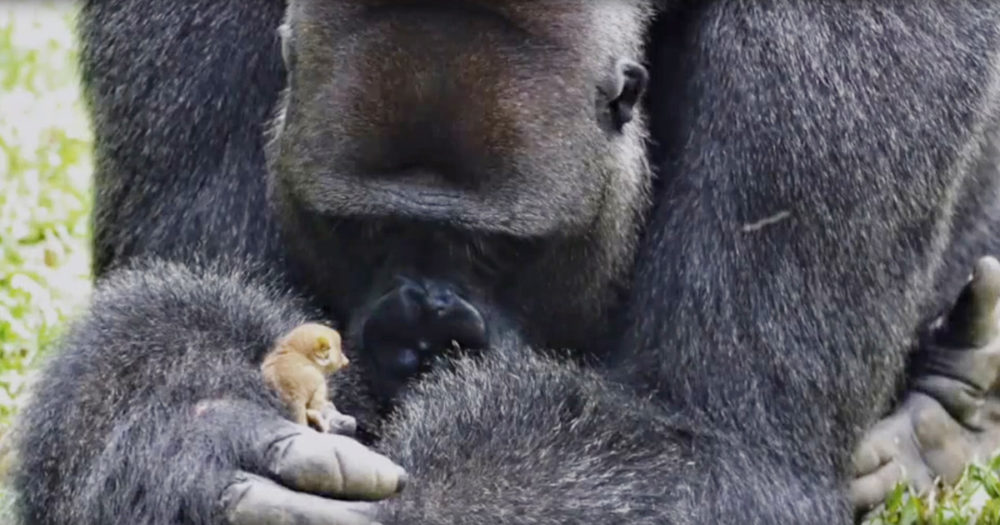 We’ve all heard the cliche phrase “opposites attract,” but a recent moment shared between a giant gorilla, and a tiny wild bush baby proves that some cliches are true. Who knew a friendship like this could be so cute?

Bobo lives at a sanctuary in Ape Action Africa, Cameroon. When the massive gorilla was just two years old, he was rescued after losing his mother to poachers. Now, the 450-pound animal lives with over 300 other rescued friends.

Living next to the rescue facility is a precious wild bush baby. This little critter weighs less than one pound and somehow made his way into the sanctuary. Caretakers couldn’t believe what they were seeing when they saw Bobo and the wild bush baby together.

The gentle giant loves to lay on the ground with his small friend, and he even holds the wild bush baby in his hand. After a heartwarming moment together, Bobo released the adorable creature back into the forest.

Gentle giant!Our silverback gorilla Bobo made a surprising new friend this week – a wild bushbaby! Caregivers discovered him cradling the tiny primate during their morning checks, and were amazed to see him handling it with the utmost care – proving that gorillas really are the gentle giants of the forest. Bobo’s group-mates were desperately curious, particularly his favourite female Avishag, but he kept them all at a distance, making sure that no one disturbed his new friend. Bushbabies are usually nocturnal so it is very rare to see one, and even rarer to witness this kind of interaction. The little bushbaby was happy to play in Bobo's arms, hopping off to explore the grass nearby, before returning to Bobo’s hand. When the game was over, Bobo walked purposefully off on two legs to deliver his friend safely back into the trees ☮️💗