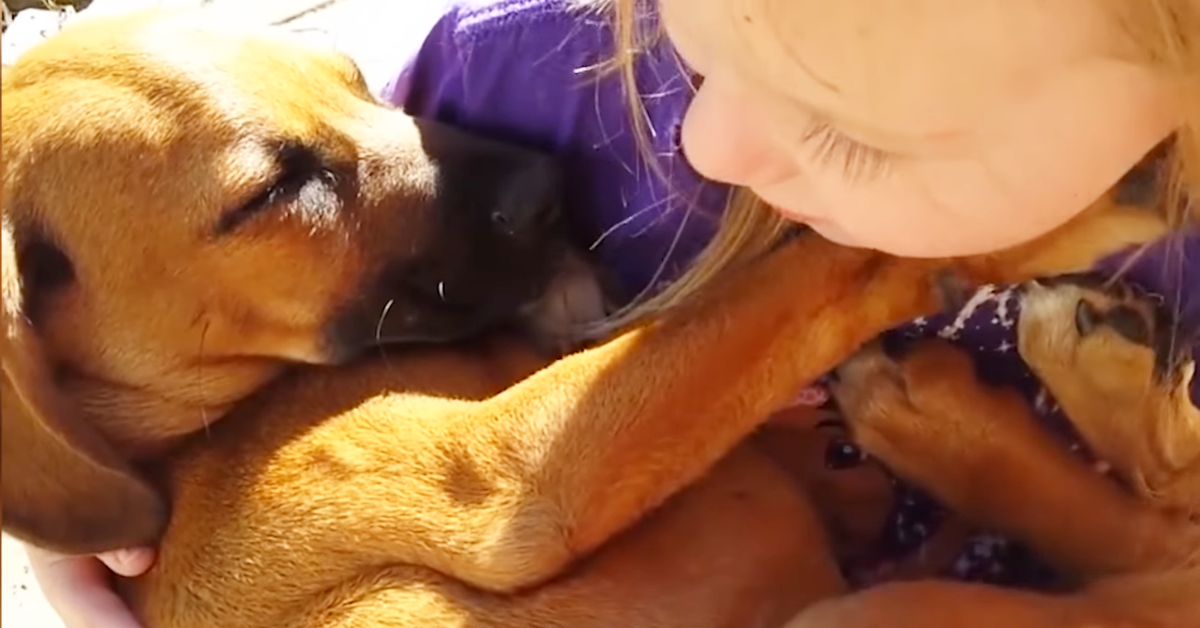 Katie’s mom, Laura Malone, posted the video online with the comment, “And THIS is why you should adopt a rescue dog.”  But it was The Pet Collective, a YouTube channel devoted to animal videos, that sent it viral.

When the sweet little girl sings softly to her napping puppy, Oakley, snoozing away while cradled in her arms, time seems to stop. You won’t believe your eyes and ears.

Rather than buy a Labrador pooch from a chain store or puppy mill, the Malone family chose to adopt from the Connecticut-based American Lab Rescue, a nonprofit rescue organization specializing in Labradors and Labrador mixes, but which prides itself on rescuing all breeds ranging from newborns to older dogs, and finding loving homes for them.

WATCH: What these little Yorkie puppies do to defend their home from intruders will make you smile

The touching family video featuring mother and daughter was even picked up by NBC News and shown during the Today Show’s Morning Boost segment hosted by Hoda Kotb.

According to the American Society for the Prevention of Cruelty to Animals (ASPCA) statistics, about six and a half million pets, mostly dogs and cats, are brought to animal shelters in the US annually.

About one and half million sheltered pets are put down every year but the number has steadily declined in recent years, which the ASPCA attributes to greater availability of animal adoptions from rescue shelters.

Also, a greater number of strays have been returned to their worried owners in recent years. They estimate that about 3 million rescue shelter animals are adopted by US families annually.

Another organization, Humane Society International, goes far greater in geography and the scope of the animals it’s eager to rescue.  Billing itself as one of the few worldwide animal protection groups, its mission includes rescuing laboratory animals, farm animals, pets, and wildlife.

“Our record of achievement demonstrates our dedication and effectiveness,” says the nonprofit’s website. Their motto is Celebrating Animals, Confronting Cruelty. Oakland is one lucky pup to have landed in such a terrific home.