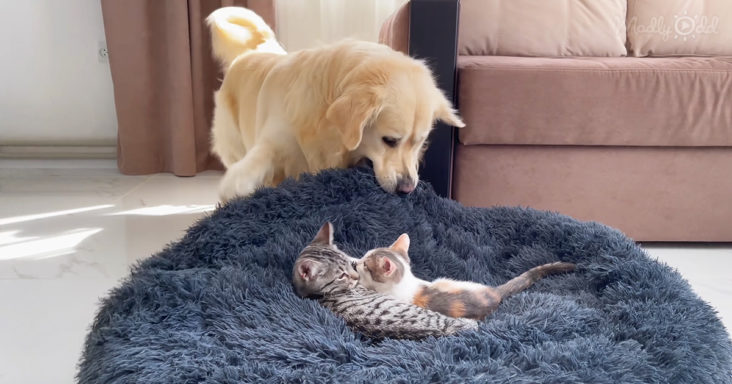 Two tiny kitties have taken Bailey’s bed. Bailey is a gentle Golden Retriever who is a bit jealous of his special resting space. His bed, which is a dog cushion sofa, has been invaded by these two feline intruders.

Bailey, at first, tries to compromise and find a comfortable spot beside these invaders. But it soon becomes obvious that Bailey cannot manage the sliver of space he has left.

He barks, and he barks but to no avail. The cats look unperturbed by the dog’s discomfort. Bailey tries another maneuver; he tries a somersault and a nudge. But once again, the cats don’t seem to care much about the Golden Retriever’s shenanigans. 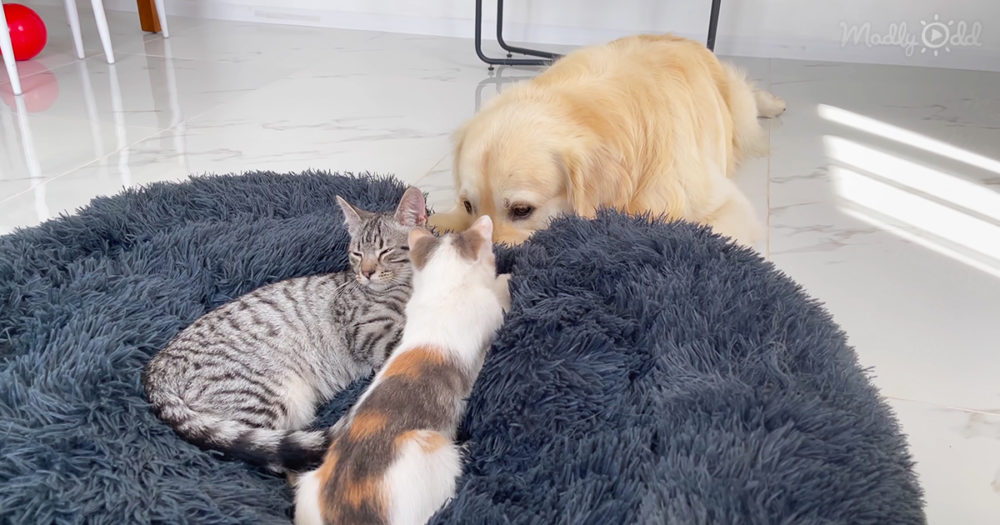 If anything, at this point, the cats seem to get even more comfortable. They don’t even grace the poor dog with a look. Bailey has had enough, and he nudges one of the cats off the edge.

It’s a temporary solution; the cats are back. Bailey, frustrated, lies on the floor. One of the kitties tries to play with him while he is lying there. He isn’t having it, though, and he tries to tip the cats over by raising the bed.

Bailey’s efforts have not borne any fruit. He seems to have given up this time, nearly dozing on the floor. Then he remembers that he isn’t a quitter. And with renewed vigor, he shakes the bed hard. The cats seem to be having fun as they get a free ride on the comfy cushion.

The dog barks again, trying to scare off the cats. When it doesn’t work, he decides to jump on the bed. He pounces on one of the kitties and drives them away. The last white kitten stays to battle the dog. But Bailey, clearly tired, decides that one can stay while he gets some well-earned shut-eye.