Parenting styles clash in this “Carol Burnett Show” Sketch. The high society mom takes her baby out into Central Park for a walk, running into a loudmouth mom from the other side of the tracks.

It’s not often that Carol Burnett plays the straight man in her own sketches, but in this one she does. Portraying one of the rich elite, she is the perfect foil to the raucous laughter and jokes barked out by the incomparable Martha Raye.

One Youtuber commented on the slapstick skills of Martha Raye. He said: “Watching with the sound off (don’t ask.) Anyhow Martha is hilarious even when you can’t hear the jokes. What a masterful comedian! She excudes funny in everything she does. And, I never realized that Carol had great legs! Er.. Martha not so much. Cheers.” We agree. She was one funny gal.

12-year-old makes her own kind of music… and she is SO GOOD! 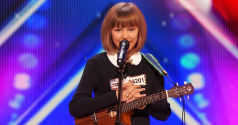