Anelida is one person who will never let another being be left in the lurch. A lifting mother cat showed up at her garden and began begging for food. It was clear that she had kittens while showing the toll that feeding the little ones was beginning to take on her malnourished frame. After some careful following, sometime later Anelida managed to expose five kittens hidden by their mother in bushes nearby.

She loaded them into a cat carrier with mother following closely behind. The family of five, including the injured mother with a permanently damaged femur, were now under the safe care of Anelida. Showered with love and taken to see a vet, they quickly gained strength. Just three months later, each of the five healthy kittens had a home.

Five happy kittens and a dedicated mother who lives a relatively normal life without pain and discomfort have all had their world changed. Thanks to the help of attentive, caring Anelida, these five kitties never had to suffer for long. It took a showing of strength for these kitten’s friendly-eyed mother to make it, but it sure paid off. 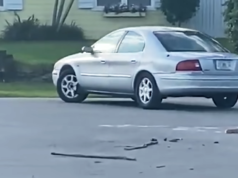