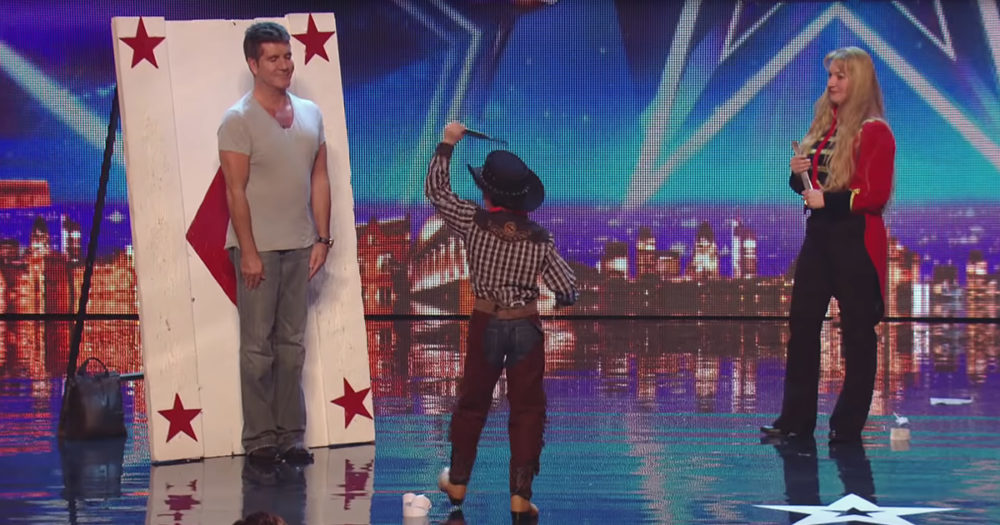 Knife throwing is one of those things that inherently makes me nervous. The potential victim must stay still while someone else hurls sharp objects at them. In this case, that “someone else” was 11-year-old Edward Pinder on ‘BGT.’ The person having knives thrown at her? That would be his mother! You can cut the tension in the room with, well…a knife.

The duo presented themselves as knife throwers to the judges. David asks if Edward “could kill his mum” if anything went wrong, and the little boy says, ‘Yes.” With his mother standing against a wooden board, Edward lets the first knife fly! After what seemed like an eternity, knives are sticking out of board all around her. Simon declared he was ‘tempted’ to ‘go up there’ to take Edward’s mother’s place.

Simon takes the stage and gets a quick course on how to stand by the board. The first knife lands without issue into the wood next to Simon. The second one, however, didn’t stick in the wall and instead bounced into the side of Simon’s shoulder. Cowell quickly scurried off the stage, but still gave the young performer a “Yes.”

Simon volunteers David for the next time Edward performs. After his big moment on TV, Edward said, “I was a bit nervous about throwing knives at Simon but I got over it. I wanted to impress David and Simon.” That child must have nerves of steel! He is an 11th generation circus performer, so it must run in his blood.