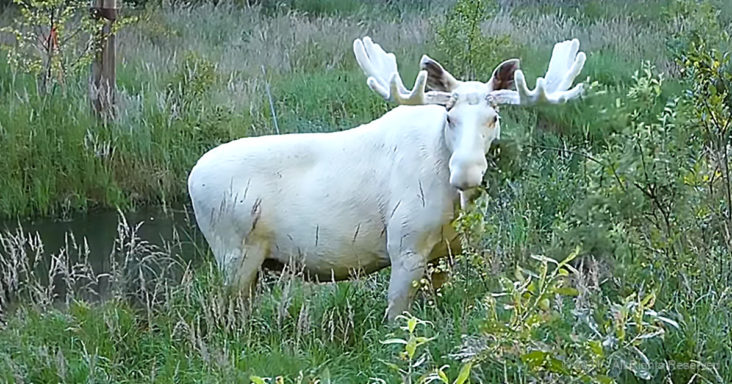 This rare white moose was quite the sight for Hans Nilsson, a politician who waited three years to capture footage of the large, majestic creature.

Some of the best things in life are worth waiting for. When Swedish politician Hans Nilsson set out on a journey to capture footage of a white moose, he had a lot of waiting to do.

White moose are rare in Sweden, Canada, and Norway. Some might mistakenly think that these animals are albino, which is a valid mistake to make. However, with these particular moose, this isn’t the case.

Albinism is a loss of pigmentation all over, resulting in red or pink eyes. The moose captured here has brown eyes, which suggests an entirely different genetic condition. The cause of the moose’s natural white coloring is the presence of a recessive (or non-dominant) gene.

The gene causes the moose’s ‘piebald’ coloring, which sprinkles lighter brown fur in with pure white. Even the fur covering the moose’s antlers is white, suggesting that this is the case.