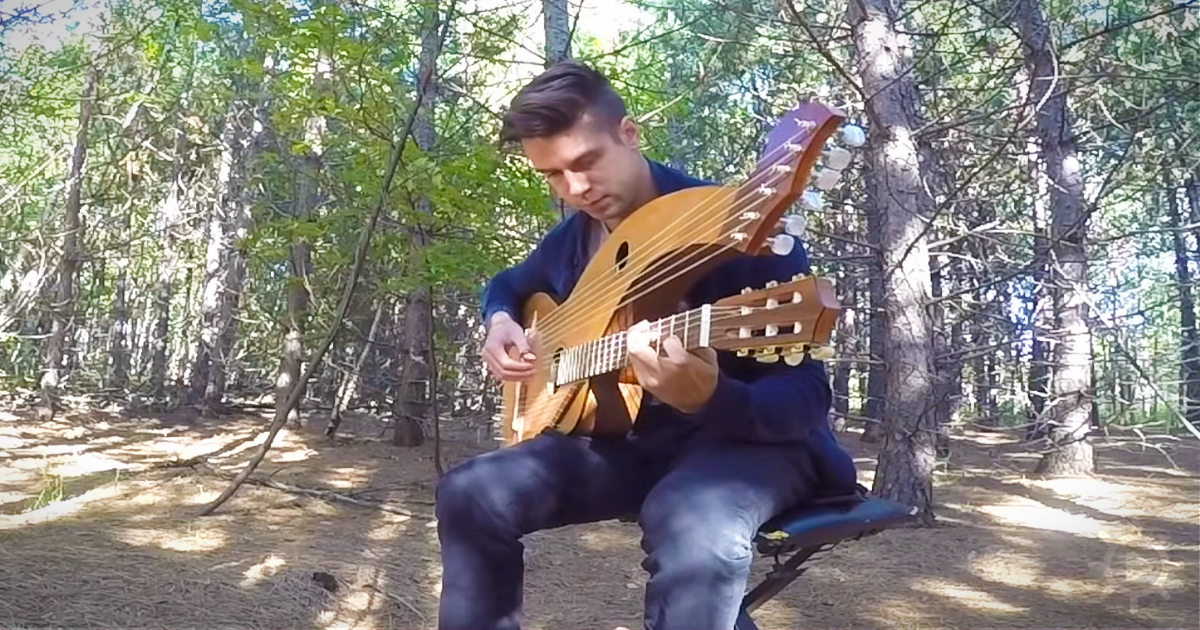 The Sound of Silence is one of the most covered songs of all time and rightly so – it’s a timeless classing that resonates with so many people, ever since its debut in October 1964, from legendary duo Simon and Garfunkel. Since it became a number one hit on the Billboard charts of that year, it’s been re-recorded by hundreds of other artists. But perhaps none so as moving or impressive, as the one you’re about the hear now.

Canadian composer and guitarist Jamie Dupuis is a master of an incredible musical instrument called the harp guitar, and for many people, it will be an unusual sight. It looks like two guitars joined together, boasting no less than 18 strings in total, and the sound it makes when played as well as Jamie does here is nothing less than heavenly.

Eighteen-string guitars are nothing new, and even the harp guitar has been around for centuries too – but we’re perhaps not as familiar with it as the normal six-string variety. With millions of people being able to play guitar around the world, the number who can master the harp guitar is considerably less – but Jamie certainly doesn’t have to worry about that at all.

The instrument’s tone and quality really shine with this choice of cover, and with the setting of the forest as the background, it’s a vignette you’re likely to watch again and again. It appears many people already have, as Jamie’s talent has already been viewed nearly 6 million times! We can bet that if his album of other classic covers is half as good as this – he’s going to have a big hit on his hands.

And we’re not alone in thinking it, as the internet comes out in support of this talented young man. “Outstanding” is a comment made by one listener — “Awesome” by another. “The 161 dislikes must come from MORDOR” comments another. Jamie clearly has a budding fan base as passionate about his music as he is!

We would heartily recommend listening to this video if you need to chill out for whatever reason. It’s the perfect rendition to relax even the most tightly wound individual, so before you throw that plate in anger – why not give Jamie’s ‘The Sound of Silence’ rendition a go. It is guaranteed to soothe your very soul into a peaceful slumber. The sound of silence, indeed!