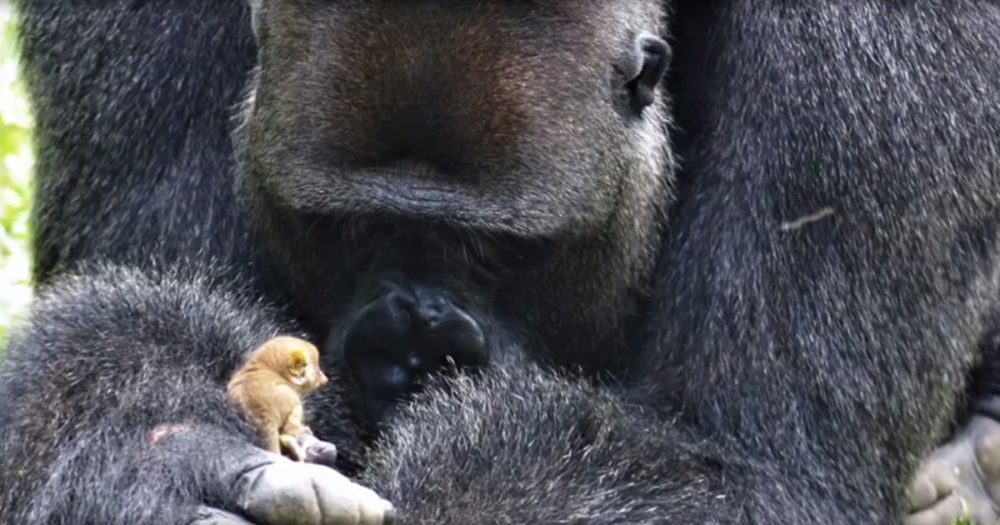 There have been a variety of unlikely pairings throughout the years, and the ones that involve wildlife are genuinely breathtaking. Take a friendship between a 450-pound gorilla and a half-pound wild bush baby, for example.

Ape Action Africa, Cameroon is a sanctuary that is dedicated to helping protect and conserve endangered primates, including apes, monkeys, and chimpanzees. One of their rescues was a kindhearted Western Lowland Gorilla named Bobo.

Bobo is a friendly gorilla who loves to spend time with other wild creatures, including a tiny wild bush baby. It was shocking to those working at the sanctuary to see that there was no fear between the two opposite animals.

These best buds enjoy rolling around in the grass together, and the wild bushbaby even helps groom the massive gorilla. A staff member has said, “We have never witnessed a wild primate interacting with a rescued one at Mefou Sanctuary.”

Gentle giant!Our silverback gorilla Bobo made a surprising new friend this week – a wild bushbaby! Caregivers discovered him cradling the tiny primate during their morning checks, and were amazed to see him handling it with the utmost care – proving that gorillas really are the gentle giants of the forest. Bobo’s group-mates were desperately curious, particularly his favourite female Avishag, but he kept them all at a distance, making sure that no one disturbed his new friend. Bushbabies are usually nocturnal so it is very rare to see one, and even rarer to witness this kind of interaction. The little bushbaby was happy to play in Bobo's arms, hopping off to explore the grass nearby, before returning to Bobo’s hand. When the game was over, Bobo walked purposefully off on two legs to deliver his friend safely back into the trees ☮️💗