There are some people in the world that just naturally command respect. They have a presence when walking into a room full of people that you cannot help but feel. A special gravity that draws others to them, but without actually inviting them. These special people have personas as huge as the planet but are for the most part very humble.

Academy Award winning superstar, “Morgan Freeman” is one such character that can fill a room with his personality alone. The multi-talented actor is known for his resonant vocal abilities that can leave you in awe as he reads the words of any script you could present him.

Many have said that “Morgan Freeman” has one of the most beautiful voices in the world, and who could argue? Like an Eric Clapton guitar riff, or a Robert Plant vocal, you don’t have to be able to see him, you just know that it is his voice you are hearing.

Freeman has lent his voice to many projects in the past, and was on “Jimmy Fallon’s Tonight Show” to promote his new Television series “Through the Wormhole, with Morgan Freeman”, when Fallon asked him to do something quite unusual. Producing a “Helium Balloon” Fallon requested that Mr Freeman alter his famous voice for the amusement of the audience.

Now there are particular things you don’t ask certain people. Like you would never ask “Attila the Hun” for a lift to China, or “Salman Rushdie” for some advice on subject matter for a book you are writing, so it would only be sensible you would think, that you would never ask a man with the talent of Morgan Freeman to alter his famous voice.

As you will see in the video below, Mr Freeman was not impressed with Jimmy’s request. We all know how good an actor he is, but the serious look on his face even had Fallon doubting his idea. His straight face not altering once, the good natured Freeman inhaled the helium and spoke. Fallon, and the audience, were in hysterics as the “Driving Miss Daisy” star only uttered a few words.

As “Fallon” tried to continue the conversation, between fits of laughter, he asked Morgan if he still owned a boat saying “I was waiting for the invite on board, you know what I was going to call you?” Morgan fires back a stern look, “Captain Morgan” Fallon says, to the delight of the audience.

As the interview concludes and Mr Morgan inhales more helium, Jimmy asks in he would come back on the show again, the response, was very high pitched……. NO.

The entire interview is done in fun and both men had a good time and the audience got to see, and hear, another side of this multi-talented actor. 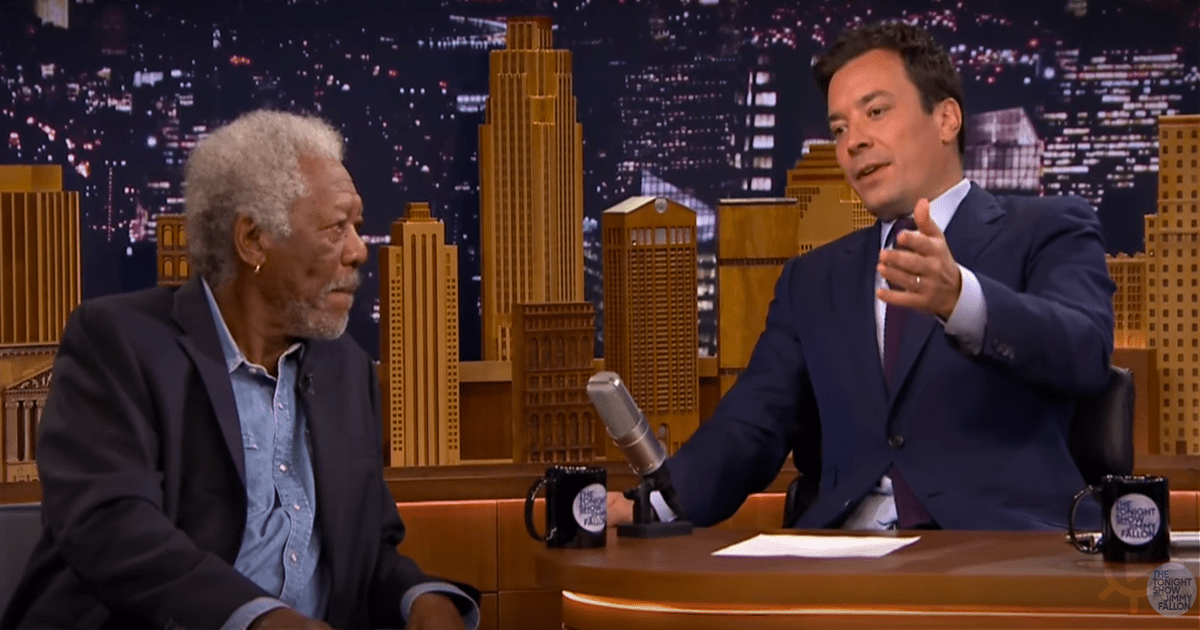