Think back to your own happy childhood. I bet you have a fond memory or two of playing outside in the mud and the dirt. Making mud pies is one of the most common iconic childhood memories. It’s just plain fun!

When you watch this video, you’re going to go back in time again and you won’t have to imagine it cause all that dirt and mud is right in front of you, but don’t worry. You won’t have to risk getting dirty. That’s the beauty of this clip. You can live vicariously and not track any mud in.

Now for some science: Those eggheads have discovered something that kids have always known: playing in the mud can lift your mood. Of course, it’s known as “fun” by us non-scientist types.

But seriously, recent studies have confirmed that dirt contains microscopic bacteria called Mycobacterium vaccae which increases the levels of serotonin in our brains, helping to relax us and calm us down. I know that sounds crazy, but think back on the last time you were in the garden or potting a plant. It made you feel good I bet.

But that’s not all. You can throw away the flash cards. Send the kids outside to play instead. Studies have confirmed that playing in the dirt can make you smarter, too! The same release of serotonin that occurs when playing in the dirt has also been shown to improve cognitive function.

So with that being said, it’s time to have some fun of our own. Get ready, get set, click play and enjoy the mud (don’t forget to share!)

When parenting is constantly saying "Excuse the Mess" 🐷😂

Alan Jackson’s ‘Precious Memories’ Is Arguably the Most Soothing Song YouR... 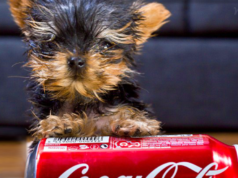 At 3.25 Ounces, Teeny-Tiny Terrier Might Be the World’s Smallest Dog

10+ kids who took instructions too literally