What is your definition of “Cute”? In the animal world we thing of adorable puppies, or even that gorgeous little ginger cat that is always rubbing his coat on your leg. What about that pony you always wanted? Definitely “Cute”. How about a porcupine? What? You ask. A Porcupine, you must be joking!

I think after you view the clip bellow your opinion of these prickly creatures will defiantly change. “Teddy Bear” the rotund rodent with a penchant for corn has had the internet in stiches receiving scores of views over the last year, over 8 million in fact.

“Teddy Bears” story is certainly a happy one. He was rescued in Western Texas, where had had been orphaned and left for dead. Fortunately for his, and us now, he had a second chance at life which he grabbed in both claws. Now as we all know, there are certain rules in the animal kingdom, one of those rules is “Never cuddle a Porcupine” those quills on their back with make your eyes water, so it’s best to stay away. This being said, “Teddy Bears” handler Allison has developed quite the relationship with her spiky sidekick.

It’s not all play for “Teddy Bear” though. He is one of the attractions at “Zooniversity” where children are taught about all kinds of wildlife, and he certainly draws a crowd, he is one of the parks favorite stars. Now Allison and Teddy’s special bond is amazing to see. We don’t often see porcupines domesticated like this, so it is a pleasure to see the interaction between the two of them. Teddy’s favorite foods are sweet potatoes and corn, and Allison always makes sure she has a plentiful supply of both.

There are two types of porcupines, the old World Porcupines, found mainly in Southern Europe, Asia and most of Africa, then there are the New World Porcupines that are only found in North America and Northern parts of South America. These animals live mostly in wooded areas, and are very efficient at climbing trees, some species are known to have spent their entire lives above ground. Unlike their old World cousins, the New World porcupine is less nocturnal and generally smaller.

These quilled creatures are the third-largest rodent, just behind the South American Capybara and the Beaver. They are quit round and are very slow, and weigh anywhere between 12 -35 pound. They come in various shades of brown, grey and white and are lovable in their own special way.

In this clip, Teddy is given a corn cob, one of his favorites, and is thoroughly enjoying it when Allison decides to take it back. Well, Teddy is not very happy about this situation and starts to voice his opinion. As you listen closely it appears as if he says” No, It’s mine” as Alison tries to retrieve it from his claws. You will have to make up your own mid about the vocal exchange, did he or didn’t he? That is the question. 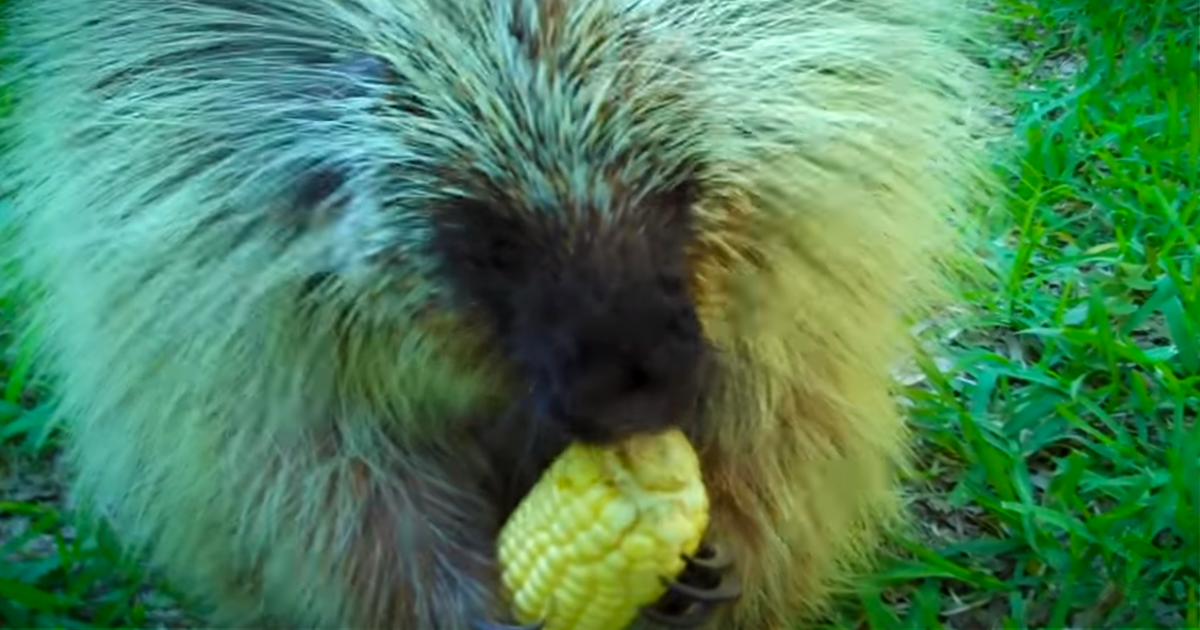