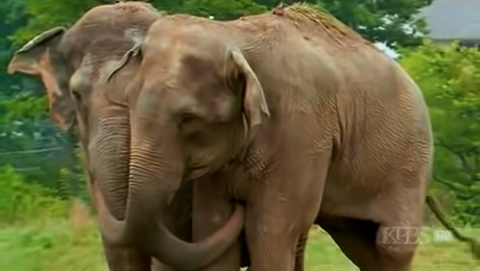 Shirley and Jenny used to be circus elephants when Jenny was just a calf and Shirley were in her 20s. Both of these majestic creatures ended up becoming crippled due to some horrendous experiences.

I think we can all agree that the circus is no place for wild animals simply due to the harsh, bleak conditions. While we may have fond memories of tents and popcorn, sadly, circuses are not natural, nor humane.

Fifteen years ago, back in 2000, PBS aired a documentary about them and captured their incredible reunion on camera. These old friends were reunited after more than 20 years. Their bonding will bring tears to your eyes for sure.

As soon as they were reunified at The Elephant Sanctuary in Tennessee, they immediately continued where they left off it seems. They are like family to each other, and it is touching to see such an incredible bond even after they got separated for so many years! 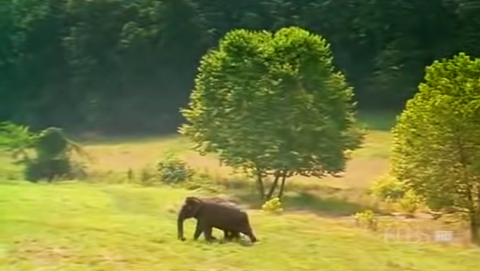 When Shirley first meets Tara who entered the barn first, Tara caresses Shirley’s face and her damaged ear, just like a human would. Incredible to watch.

Solomon has been Shirley’s caretaker for quite some time, and today he gives Shirley her last bath. He cries as he talks about her, and I nearly lost it when he said, “I don’t know who’s the first to put a chain on, but I’m glad to know I was the last to take it off.”

Shirley and Jenny met when Jenny was the last to return to the barn at night, and during the night, in their desire to be closer to each other, they bent the bars between them.

So amazingly touching – the story of Shirley and Jenny, two crippled elephants reunited at The Elephant Sanctuary in Tennessee after a 22-year separation. The bonding was immediate, intense and unforgettable.

There are people in this world who do not understand humans love for an animal. But anyone who has owned a dog or cat understands that animals love us WAY more than we love them. Animals genuinely do understand unconditional love!

Elephants do not belong in circuses. Share this emotional moment with your fellow animal loving friends to remind everyone how important it is for life-long friends to stay in touch.