The video we’ve posted below is an oldie, but a goodie. It’s an internet classic from way back in 2006. It starts with some kids practicing their skateboarding moves, but don’t worry, this isn’t an epic skateboarding movie.

A loud honk from a car horn got the skateboarders’ attention and the kid who was filming quickly panned over to his left. An old woman was shuffling across the street at a crosswalk with a stop sign.

She’d hardly begun to cross when the impatient driver of a Mercedes convertible who she was inconveniencing started revving his engine aggressively and honking his horn some more.

This lady was utterly unfazed and simply called his bluff: she kept on making her way slowly and carefully across the path of his car.

It would seem we have a clash of personality and life stages. She’s obviously seen it all and is old enough to have earned the right to be stubborn and not care what anyone else thinks of her.

Meanwhile, the middle-aged man driving the luxury convertible is making a point of being in a hurry as obnoxiously as he possibly can. But Mr. Self-Important, who doubtless considers himself a tough guy, isn’t going to run her over and she knows that just as well as he does.

Suddenly, out of nowhere, and with lightning-fast reflexes, the old lady smacks her handbag into the convertible’s front bumper. Bang! The airbag deploys!

The obnoxious driver is in a state of shock, not believing what just happened. He takes his glasses off and sits there in a daze. After lashing out with such incredible speed and ferocity, granny goes back to shuffling across the street, the same look of grim determination on her face. You can hear the skateboarders laughing in the background. 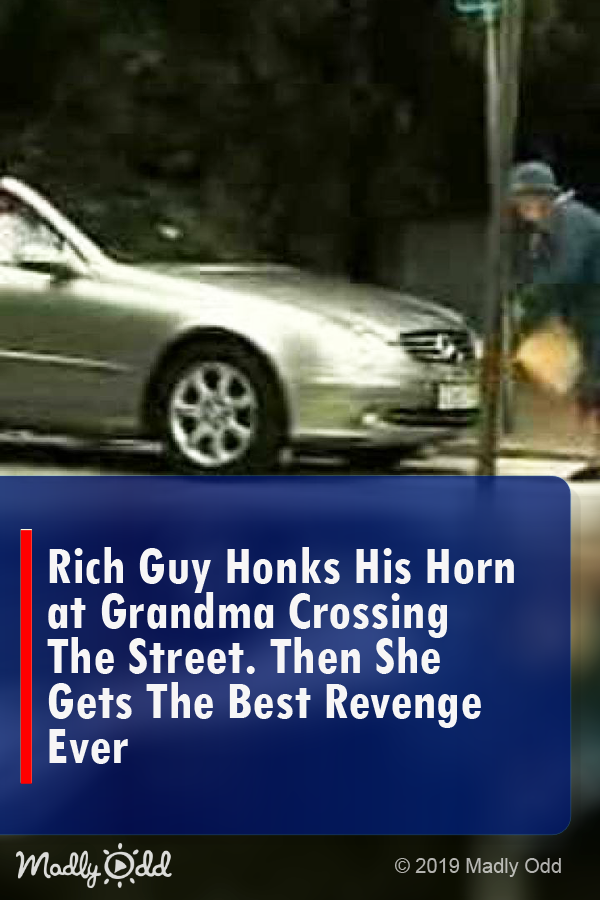