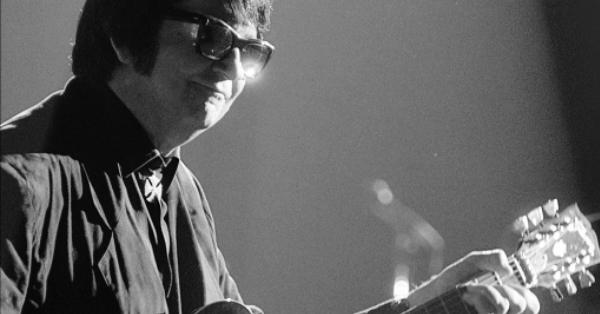 Roy Orbison was truly a rare talent. His range was and is still untouched today. It’s rare to have a male vocalist hit such high notes, yet can also do wonders to those low notes.

Originally aired in 1988, Roy Orbison and Friends: A Black and White Night was a Cinemax special featuring the legendary Roy Orbison, backed by the TCB Band, known for supporting Elvis from 1969 until 1977. Special musical guests included Bruce Springsteen, Bonnie Raitt, and others. The special was filmed entirely in black and white, giving it a timeless feel. It was shot at the Ambassador Hotel’s Coconut Grove nightclub in Los Angeles.

The audience was a sea of celebrity admirers, including artistic genius David Lynch, rocker Billy Idol, actor Patrick Swayze, comedienne Sandra Bernhard, and legend in his own right, Kris Kristofferson. As Ronnie Tutt kicks off the familiar drumbeat, the crowd instantly recognizes the favorite and begin clapping in time.

The song’s origin is interesting: While Orbison was at home writing a song, Orbison’s wife Claudette came in and said she was going to go into town to buy something. Orbison asked if she needed any money, and Dees joked, “Pretty woman never needs any money.” Inspired, Orbison started singing, “Pretty woman walking down the street.”

Roy Orbison was truly a rare talent. His range was and is still untouched today. It’s rare to have a male vocalist hit such high notes, yet can also do wonders to the low notes. He did it with such force, such power, but the best of all, such clarity that his music will live on for thousands of years unsurpassed. What still amazes me since the first I’ve heard his music until today is, he did it with ease. It’s incredible. His voice is unmatched even today.

Enjoy Roy’s ‘Pretty Woman’ performance from “Black and White Night” below and STAY TUNED ’till the end and watch three additional encore performances from Orbison: “Dream Baby,” “Only the Lonely,” and “Ooby Dooby.” They’re all coming right up after ‘Pretty Woman.’

If you liked Roy’s performance share this because great music was meant to be shared.