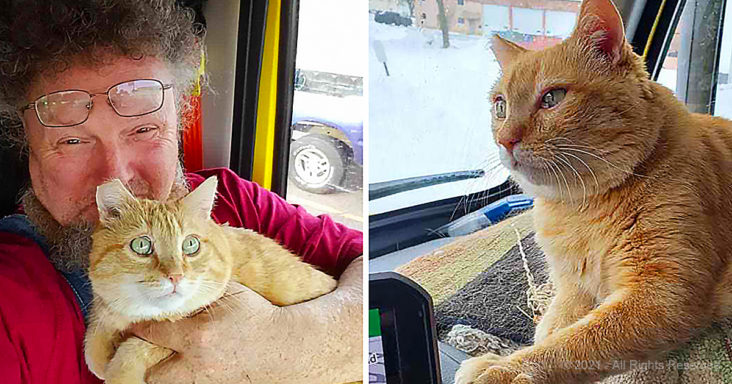 When Paul Robertson’s cat Howie passed away, he was overcome with loneliness. When he adopted Percy the orange tabby, his life would never be the same.

Some trucking companies allow their long-haul (or over-the-road) truckers to bring along an animal companion for their long drives. While most choose to take dogs with them, a select few prefer traveling with cats.

Not every cat makes for an excellent long-haul companion, especially those that are skittish or scared of loud noises. When Paul Robertson’s previous companion, Howie, passed away after years on the road, he was overcome with grief.

He finally decided to visit an animal rescue and try to find another cat that would keep him company on the road. That’s when he met Percy, a ginger tabby with scars, a torn ear, and a missing tooth.

Percy had lived a rough life before his rescue, but he was affectionate and tolerated the road well. Once, after they set off together, Percy went missing and turned up 400 miles later covered in oil – he’d been sleeping under the truck!

Together, Percy and Paul undertake thousands of miles of long-haul drives every month, and Paul is so happy that he decided to adopt his precious companion. “I wouldn’t be laughing like this if I were alone,” Paul says of life with his feline co-pilot.