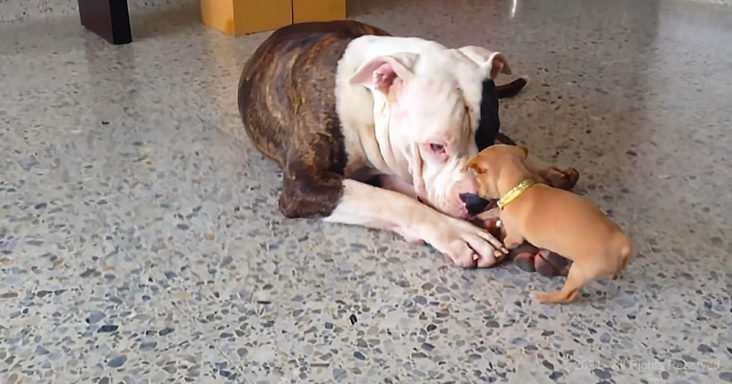 This Chihuahua puppy is the tiniest dog we’ve ever seen. He wants to play so badly, but his bulldog friend just wants to take a nap.

This tiny Chihuahua pup just won’t be told no. His friend, an American Bulldog, is more than three times his size, but he really wants to play!

His bulldog friend just wants to nap. When the Chihuahua begins chewing on his tail, he looks slightly annoyed, but he just watches. This little guy keeps coming, jumping at him and stepping on his face.

It’s a good thing that this bulldog is so incredibly patient. When he does swat at the Chihuahua, he is so gentle and patient that it just melts our hearts.

Even when the little guy is climbing all over his face, he manages to stay patient. At one point, he reaches out to nibble on the Chihuahua’s leg. We all know that bulldogs have strong jaws, but this guy is so gentle!

We can’t believe how small this Chihuahua is and how much his sleepy bulldog friends love to play with him. This gentle giant is truly a good boy!