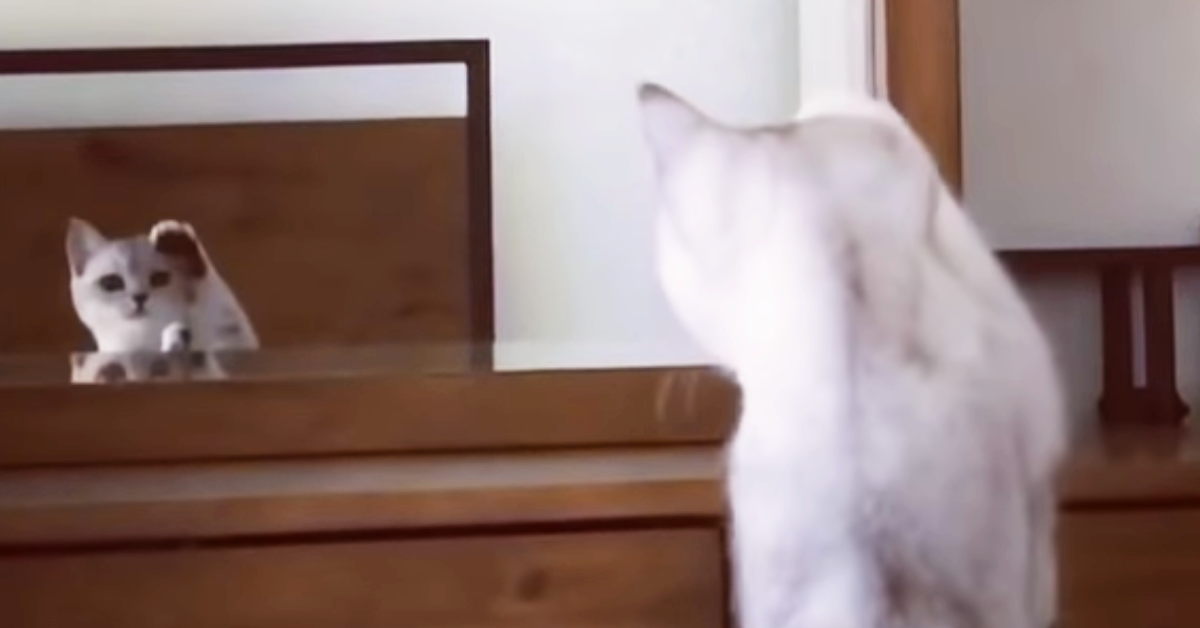 We should have known.  It was only a matter of time before cats would stop being scared of their own reflections and moved on to the next stage: Practicing their jazz hands in the mirror.

Recently, pet parent Fraser Napier posted a video of his cat Sox looking at himself in the mirror, slowly raising one paw and looking with wonder at his own reflection. It’s so un-catlike, it’s uncanny.

Mirrors have long been used in cognitive tests to measure intelligence. The University of Albany developed what is known as the “mirror self-awareness evaluation,” or MSR test. In the event, the animal (or human!) tries to touch the section of their body they see in the reflection, the subject is considered to have shown mirror self-awareness.

Very few animals pass this test. All the excellent apes–humans, chimpanzees, bonobos, gorillas, and orangutans–pass, as do some cetaceans like bottlenose dolphins and orcas (killer whales), and a few oddballs such as the elephant and magpie, but this phenomenon is rare in cats and dogs. If your fur baby can see himself or herself in the mirror, you’ve got yourself a certified smartypants.

Watch how Sox reacts when he discovers himself in the mirror. First cautious, then mesmerized, he suddenly “gets it” in a startling burst of awareness. It really is cool how he seems to be experimentally posing in different ways.  “Yup.  Test confirmed.  It is indeed myself.”

And they say that cats don’t pass the mirror test. This and many videos like it proves that cats ARE self-aware. Take for example “Mimo” below.

As an Instagram star, Mimo the cat is no stranger to the camera, but when she sees her own reflection in the mirror, something quite astonishing happens that has everyone in an uproar. 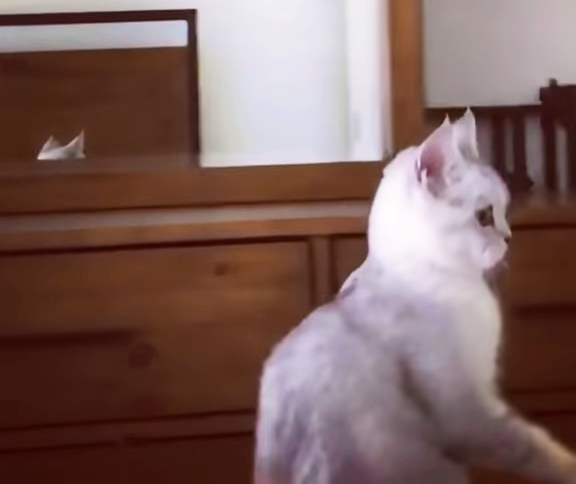 In this video recorded by her mommy, Mimo can be seen resting on the bed. Then out of the corner of her eyes, she notices moment across the room (the mirror).

Her curiosity gets the better of her, and as she slowly investigates, she sees something she can’t quite explain at first. It looks like two white tips (her own ears) and they appear to be moving along with her, matching her move for move.

As she gets closer those things in the mirror, appear to be moving with her. “What sorcery is this?” But Mimo is apparently the Sherlock homes of cats, she knows all about the Scientific Method. The game is afoot, and she must solve this mystery.

Then she slowly rises before the mirror in apparent self-recognition. In a moment that reminds us of that old Charlie Chaplin mirror sketch, she raises her forearm to touch her ear, then repeats as if to verify for herself what’s going on. “Whoa, that’s me!” she’s thinking. No doubt this confirms in her mind what she’s been told about being a “pretty kitty”. 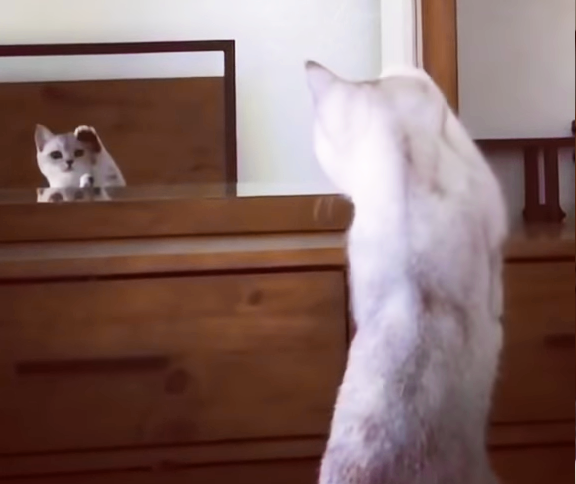 This has to be the sweetest most adorable thing I have ever seen. Mimo is obviously a smart cat, but this takes the cake. Now, as the proud parent of eight cats, I know first-hand that cats are much, much more intelligent than most people know, but even I am stunned by Mimo. This cat passes the famous “mirror self-recognition test”.

Share Memo with your friends on Facebook because cats make the Internet a better place and your friends are going to be awestruck when they see little Memo in the mirror.