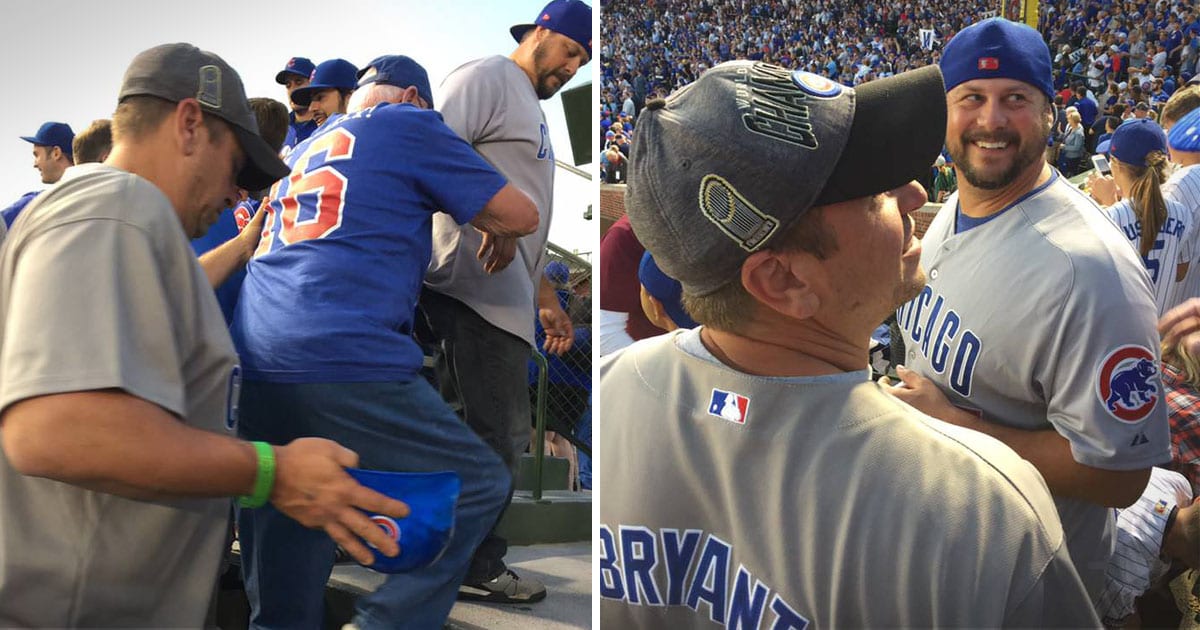 A small act of kindness that costs nothing might be something you’d do and then quickly forget. But it can sometimes make a bigger difference than you realize.

The 2016 Chicago Cubs stunned the baseball world, winning their first World Series since 1908 and ending the longest championship drought in American sports history. But before they could do that, the Cubs had to survive the playoffs, dispatching the San Francisco Giants and then the Los Angeles Dodgers.

For Cubs fans Lauren Hinkston Hintzsche and her husband John, being at one of the games against the Giants was a real treat, even if they were out in the bleachers. Wrigley’s bleachers are steep and as Lauren says, “Even on a good day, the bleachers can be tough to navigate.” They noticed an older couple trying to make their way to their seats; the husband was really struggling. But then two men stepped in to help out. “They noticed right away that the older gentleman was having a tough time and had helped him down the stairs to sit in their seats.” The two men’s assistance didn’t stop there.

According to Lauren, “During the game they would help the older gentleman stand when the crowd stood and the one guy stayed seated at times so this gentleman could see the game. At the end of the game, these two awesome guys made sure the older gentleman made it up the stairs with no problems.”

The two men who helped were brothers, one visiting from out of town. They had no idea just how meaningful their kind deed was. “During the game, this older couple held hands, he patted her knee and she helped him stand when there were exciting plays. About the 3rd inning she leaned over to me and said, ‘He’s going through chemo right now. We have done about everything else we can do and this is the last step.'”

Glad there are still people out there willing to perform random acts of kindness? Let us know in the comments at Facebook and be sure to like and share!