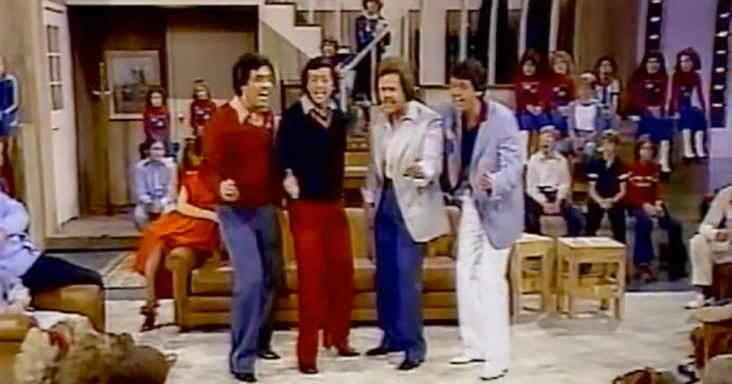 The Osmond Family is famous for their singing talent and many years in the spotlight. The incredible group of seven siblings grew up performing together. In this clip, they reminisce about their early days while filming in front of a studio audience and a set full of talented children. 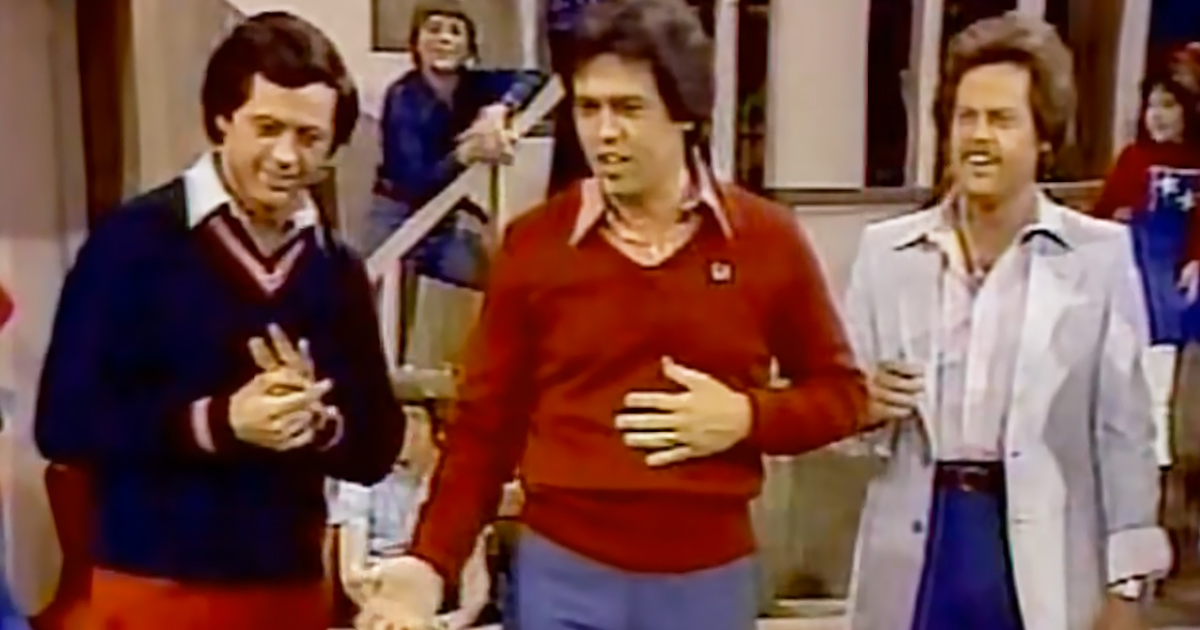 Alan Osmond, the oldest brother, begins by telling stories about the group’s early days as a four-part harmony quartet. Their singing style sounds just like a barbershop quartet. They sing a hit from their past titled, ‘Side by Side.’ The blend and tone are unique.

The brothers introduce their father, who is sitting on screen with their mother. The Osmonds joke with him, saying, ‘Father may not be the best choreographer in the world, but I’ll say one thing, the price was sure right!’ 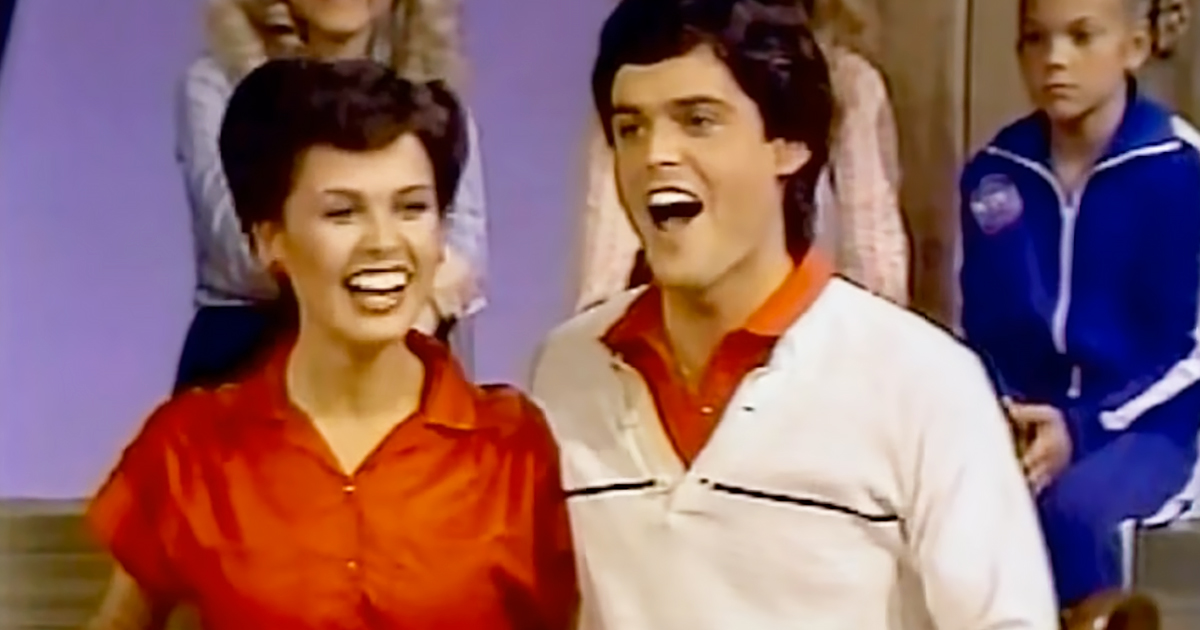 They talk about their first big break in Disneyland. Jay was very nervous because Walt Disney was in the audience, but Walt found his mistakes and nervousness hysterical. He told Jay to mess up on purpose for comedy’s sake. Then, Jay passed on that tradition to his younger brother, who joined the brothers for another song. The whole song, he messes up the choreography, loses his fake mustache, and does physical comedy.

They also sing a beautiful version of ‘Danny Boy’ to honor their brother Alan’s service. They talk about their time singing backup to Andy Williams. They tell how the audience would always request they sing Williams’ famous song ‘Moon River,’ but they just performed the backup parts for comedy! 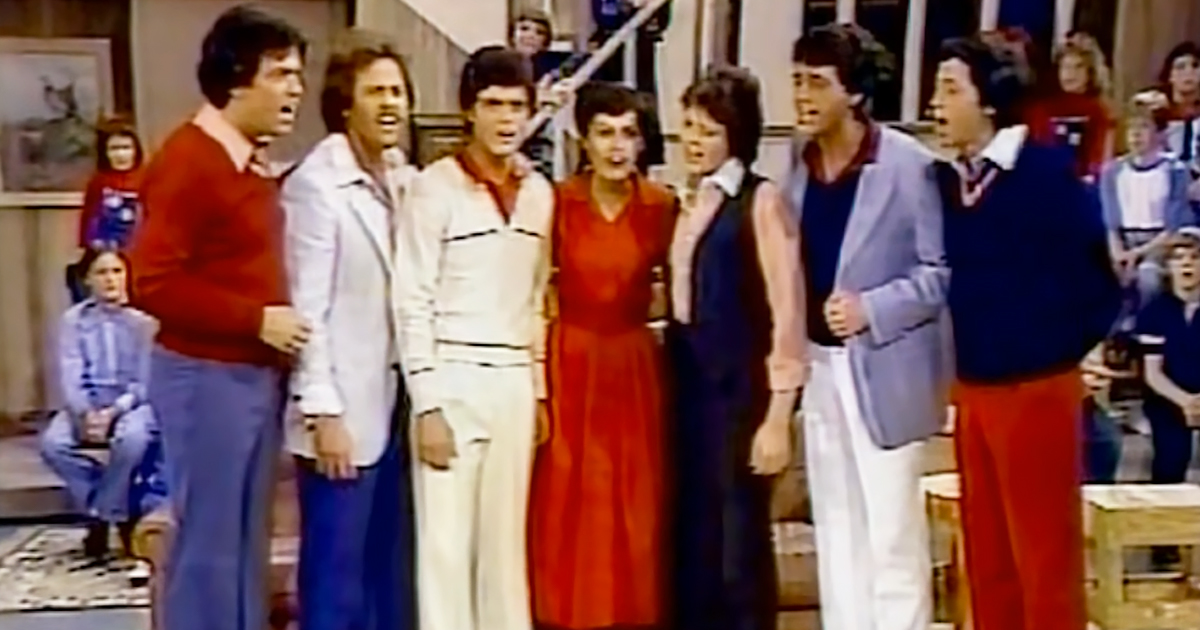 The brothers introduce their sister Marie, and she sings her first hit, ‘Paper Roses,’ while the brothers goof around. One is doing a headstand, and the others are swaying comically. Then, Donny and Marie stand by a piano and sing their hit, ‘I’m Leaving it Up to You’ followed by ‘Make the World Go Away.’ Donnie launches into ‘Puppy Love,’ and the brothers start barking and grab his legs, stopping the song.

They talk about their family, fun, and great parents. They set up to do 7-part harmony. Donny moves his older brother, saying, ‘I can’t sing next to bass.’ Each family member continues to push him down the row while the audience laughs! The family performs Stevie Wonder’s ‘You are the Sunshine of My Life’ in remarkable 7-part harmony. The vocal blend and tight harmony prove why the Osmond family is so beloved. Their talents and family bond are a great part of American music history!