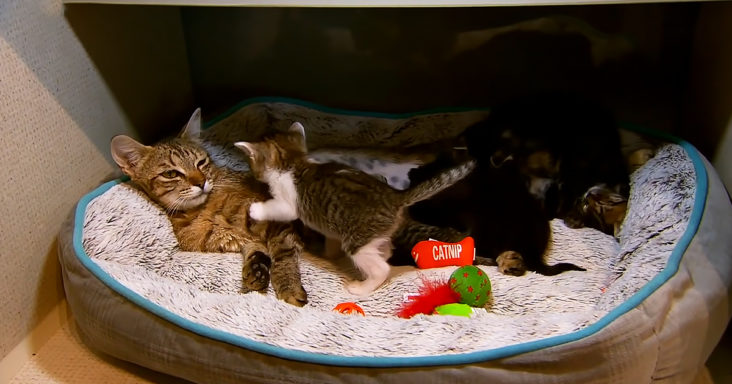 Recently, a few stories about adorable kittens have become immensely popular online. The first story was about kittens in a house in the woods not far away. The five peach fuzz Cornish Rex kittens were just 4 days old. The Cornish Rex was a breed developed by accident resulting in a mutation in Cornwall, England, in the 1950s. Their coats are excellent. These cats lacked the outer hair layers like other cats. As a result, they’re said to have the softest of all cat coats. 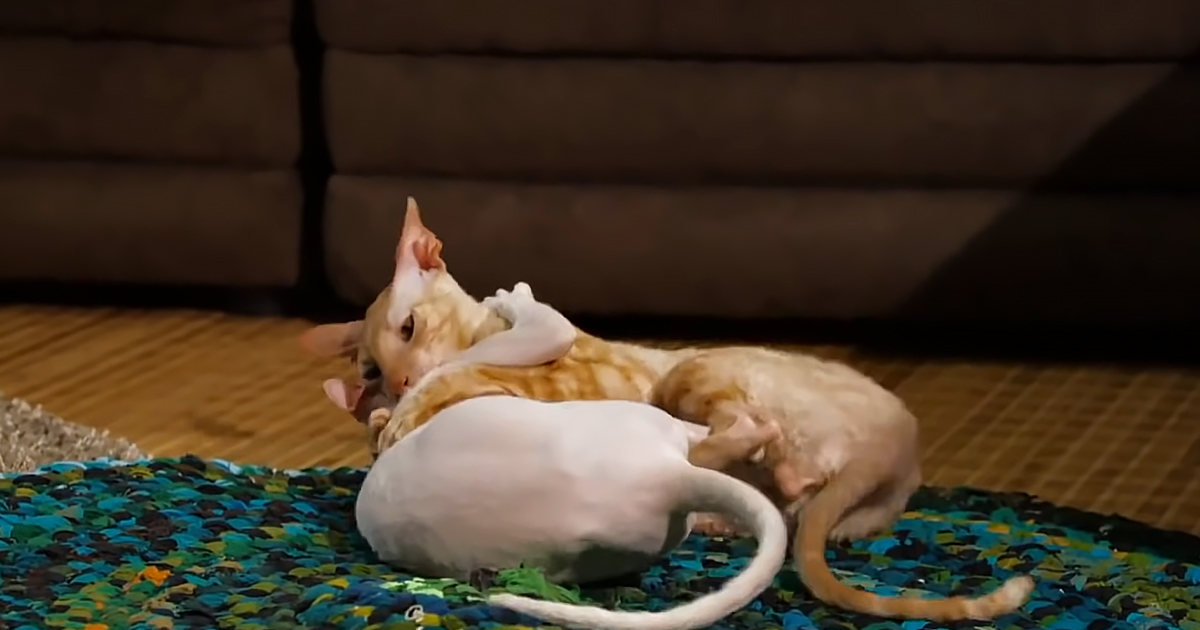 Cornish Rex comes in all colors and patterns. Mom, Beanie was all white while Linus had a red tabby coat. This breed was athletic and playful like a dog, and they used their paws like skillful hands. Linus loved to clown around the whole house. Just because he was a dad, that did not stop him from acting like a kitten. However, these five Cornish Rex, four girls, and one boy could not do much yet.

These kittens would have to keep up with the liveliest dad on the block one day. White-coated Tofu, one of the tiny kittens, suddenly set off away from a gang of four girls. He was the only boy and already felt the need to prove himself and get to the front of the dinner line. So when his sisters made it to the meal, he was not too concerned about chivalry. And when Tofu had his fill, he put himself at the head of the table. His red tabby sister, Kiki, dined unconventionally. Her coat color was just like dad Linus. And it looked like she had also inherited his love for acrobatics. Linus couldn’t wait for the day that these kittens could be his playmates. 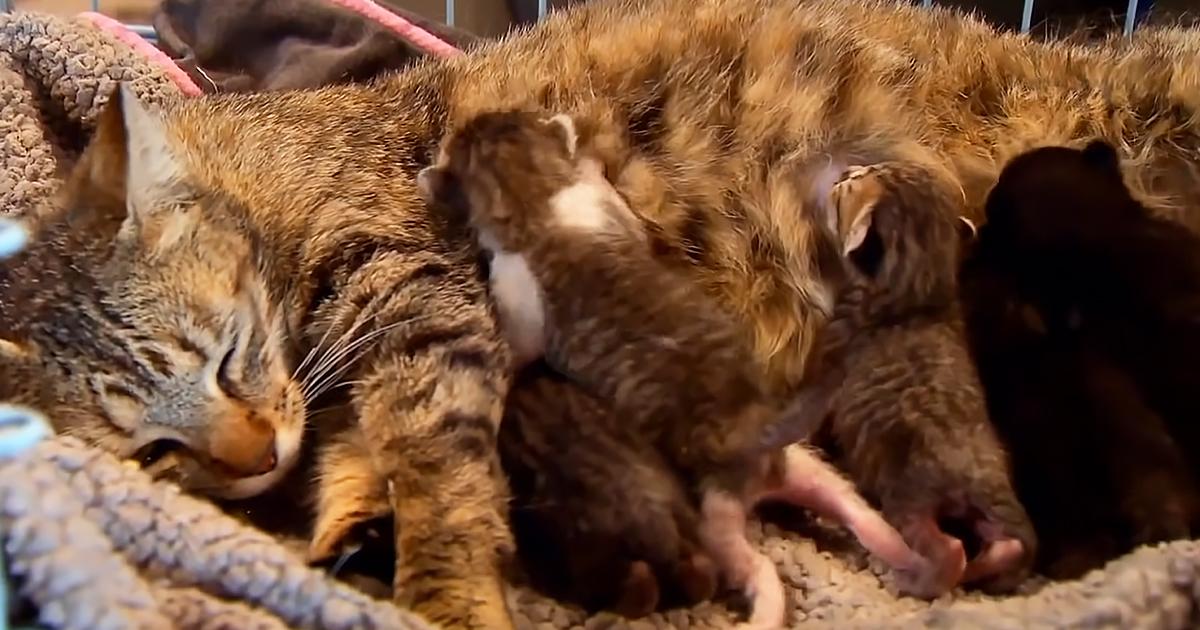 The following story was about a beautiful abandoned cat that was rescued. A lady saw the cat thrown over a 10-foot fence. The Clinic Adoption Manager, Susan, thought that the cat was left because she was pregnant. The woman, who brought the cat in, did night security work, so she cared for the cat for a few days until the babies were born. It was amazing that the cat had given birth to 5 adorable babies. Susan placed the new mama and her babies in their new home.

The vet, Dr. Don Kraft, came to check the cat and the little ones later. The vet suggested that the cat was very young, about a year old, and was healthy. He advised a feline leukemia aids test for the mother, but that could wait until the babies grew up. A few weeks later, they did the test, and the result was negative. Hector, the vet tech, was happy with the result as he knew that the cat and her babies would have an everyday healthy life and some lovely owners. 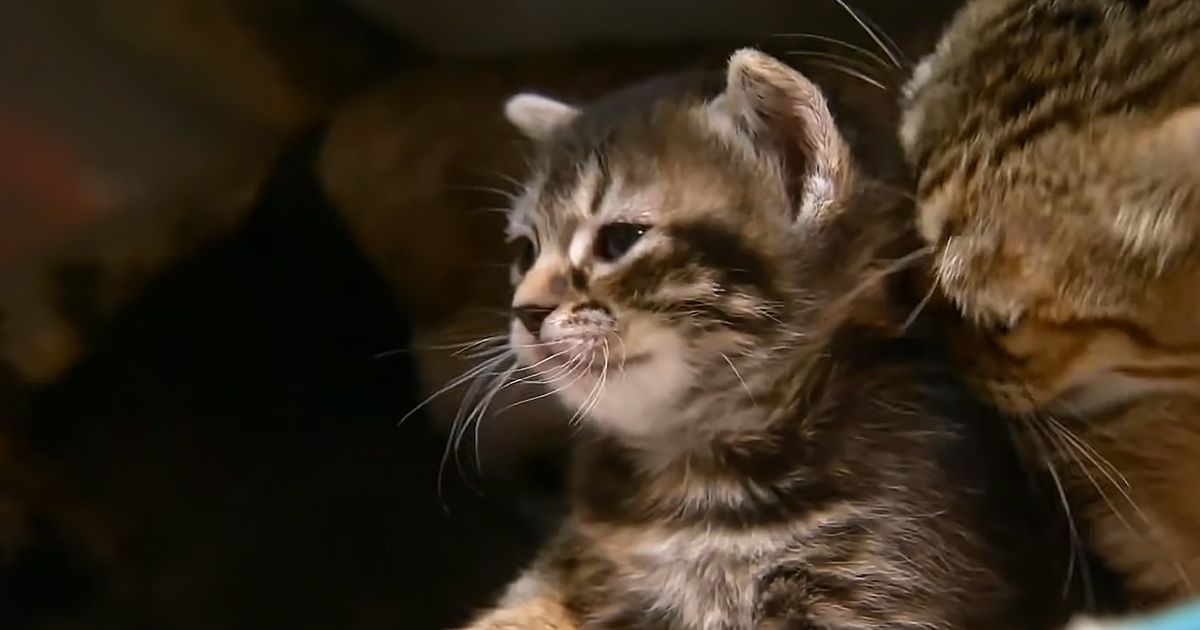 In another story, Jackson Galaxy, the cat expert, and Kitten Lady, Hannah Shaw, came together for the adoption day of 50 beautiful and adorable kittens from Los Angeles. Those lovely kittens were ready to be adopted by amazing owners waiting outside the adoption center. Jackson advised the future cat parents that adopting two kittens is half the work as they would socialize and be less bored. These prospective parents were excited to see these adorable kittens and had already started playing with them.

A little girl named Natalie found a tabby cat, Clairmont and Barstow, and played with them. Soon the parents decided not to separate the kitten siblings and adopt them together, which made the two hosts very happy. Egg, Quimby, Elene, Apple Sauce, Apple Juice, and many other kittens were picked and had a new home. Out of 50 LA kittens, 34 had been adopted in Colorado. This made Jackson and Hannah teary-eyed and happy that they could help these innocent animals find new homes.