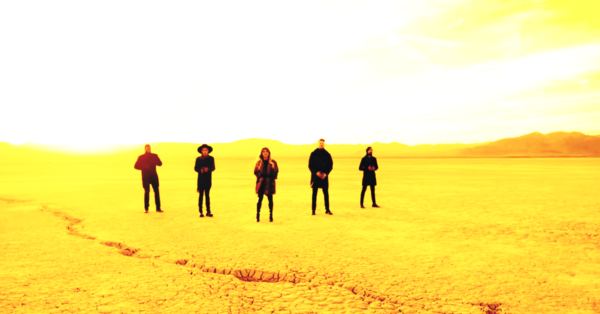 Pentatonix gives us one of the most uplifting versions of this song I have ever heard. Their pitch-perfect voices blend together in flowing harmonies and beautifully deliver this powerful melody.

7 million views in 2 days! That’s what happened when Pentatonix premiered this official music video on YouTube. The internet was on fire with people sharing, liking, and commenting on this amazing rendition of Leonard Cohen’s “Hallelujah”.

With roots in Arlington, Texas, the group was originally founded in 2011. Their fresh approach to acapella music, by incorporating modern pop covers and beatboxing, has led to a massive following.

Pentatonix gives us one of the most uplifting versions of this song I have ever heard. Their pitch-perfect voices blend together in flowing harmonies and beautifully deliver this powerful melody.

“Hallelujah” was written and performed by Cohen in 1984 and in a way, has taken on a life of its own. Originally a synth-based, baritone ballad, this song was born as an evolution. Cohen wrote around 80 draft verses for “Hallelujah”, with one writing session at the Royalton Hotel in New York where he was reduced to sitting on the floor in his underwear, banging his head on the floor.

“To find that song, that urgent song, takes a lot of versions and a lot of work and a lot of sweat,” he told Paul Zollo in an interview for SongTalk magazine.

For decades the song experienced this sort of curse of delayed appreciation. For instance, John Cale recorded a sincere and somber version of Cohen’s song in 1991, yet it didn’t receive acclaim until it was featured in Dreamworks hit film “Shrek” in 2001, a full decade later. Yet when the company released the soundtrack, they used Canadian singer-songwriter Rufus Wainwright’s 1997 recording.

The same seemed to be the case for the sensual and haunting rendition by Jeff Buckley. Recorded for his album Grace in 1994, the track didn’t even see the charts until 2002, 5 years after Buckley’s death.

Over the years, this ballad has piqued an interest that ripples around the globe. Rolling Stone magazine named it as one of the 500 greatest songs of all time. It has sparked an array of written articles, books, courses of study, and even a documentary. The BBC commemorated the 25th anniversary of the first recording with an hour-long radio documentary, “The Fourth, The Fifth, The Minor Fall”, in which the song’s history and numerous cover versions were presented and discussed.

With artists from Bob Dylan to Justin Timberlake performing their chosen version of this enchanting song, the number of covers in the hundreds, in many languages. Featured widely in modern movies and television and topping the charts worldwide, over and over again, “Hallelujah” is a song that has as many interpretations as it does covers.

Perhaps that’s the reason for the wide appeal. Whether you view it from a spiritual or secular standpoint the song can touch a special place inside your heart, and speak directly to you.

“I love their version of this song. This group has brought much enjoyment to me for some years now. Their harmony and sound effects are fantastic with their Acappella presentation. Absolutely tremendous!”, said one fan of the Pentatonix video. “This is definitely my favorite version of Hallelujah by far.”, commented another.

Check out this stunning rendition of a song that has continues to live and grow through new reinterpretations. It’s a stirring melody with lyrics speaking to our need for connection, whether to God or man, that resonates with humanity around the globe.

Tell us what you think of Pentatonix’s rendition of “Hallelujah”. What’s your favorite version of the song?