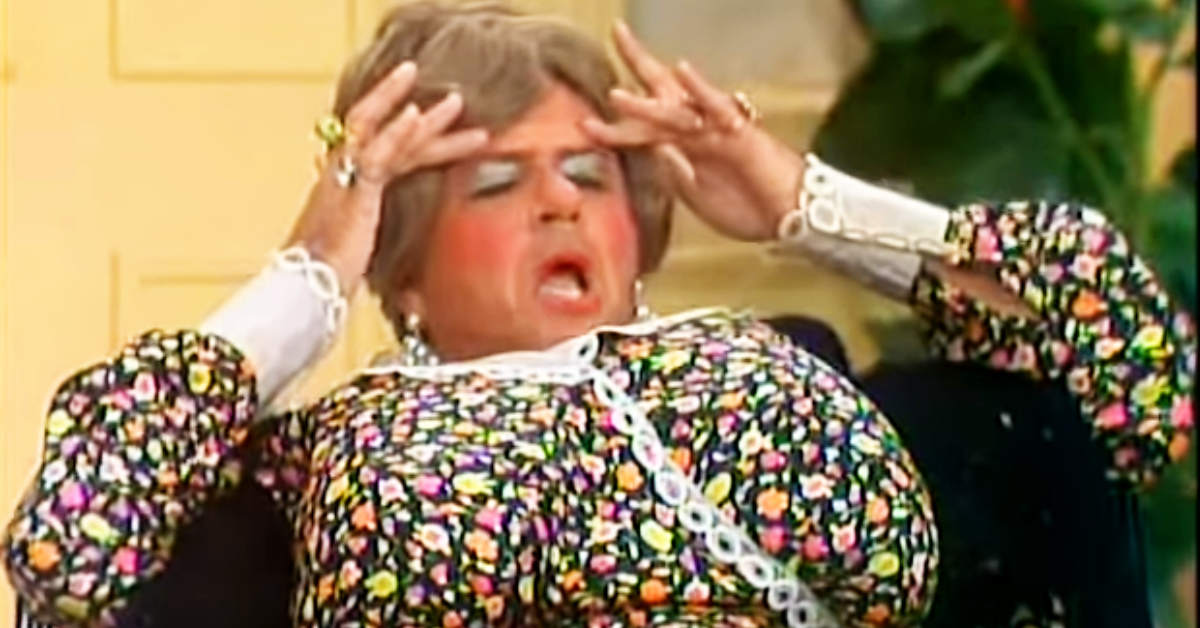 The enduring comedy of The Carol Burnett Show is still loved and celebrated by literally millions of fans, old and new, courtesy of the web.  If you recall gathering with your kinfolks to enjoy this hit comedy show throughout the 1970s, then don’t move because you’re in for a sidesplitting treat.

In this gem of a sketch from the show’s recurring “As the Stomach Turns” soap opera send-up, Tim Conway once again appears as the “oldest man,” aka Duane Toddleberry, a beloved eccentric who drew laughs through his slow-motion antics.

In this sketch, he plays a life insurance agent visiting the home of the family matriarch played by Carol Burnett, whose daughter Jamie has just been killed in a skydiving accident.  Tim’s convinced that she isn’t really dead and is hiding on the premises someplace.  He insists on checking every nook and cranny, including a painting of a barn, which he attempts to enter!

Harvey holds a séance to contact the dead Jamie. Lo and behold, it works. Vicki Lawrence plays “Jamie,” and boy has she got a surprise. First of all, she’s not dead, but that’s only the beginning. You won’t believe what happens next.

Here’s a hint. Another wildly popular TV series at that time had a main character named Jamie who was in a severe parachuting accident and wound up possessing extraordinary powers.

“The blooper on this sketch, if you can find it, is the funniest thing I have ever seen,” commented one amused fan.  “Carol reaches over and squeezes Mother Marcus’ tit when Harvey is cutting up on the chair… the audience goes insane… then Harvey tries it back.  You don’t think of Carol doing that kind of stuff but this was GOLD.”

Another nostalgic fan couldn’t have agreed more.  “These folks had chemistry…even when they were laughing and couldn’t do their lines.”

Watch Carol, Tim, Harvey and Vicki give the audience contagious giggle fits “As the Stomach Turns” by clicking the below. Then share it with a friend!