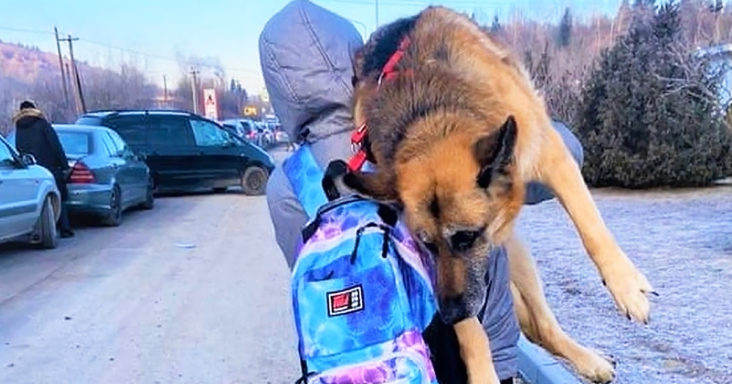 Many people have been commending a Ukrainian woman who fled with her family and dogs. The kind woman had carried her senior dog on her shoulder for 17 kilometers or 10 miles approx.

Alisa recently shared her long & emotional journey online after many people wanted to know about her. Unfortunately, Alisa could not leave Kyiv because of an unfortunate incident in the family the day the invasion happened.

The intelligent woman worked as a Python programmer at a German company that had helped Alisa and her family leave for Poland. The whole family left the city in a small but beautiful Peugeot 307.

9 family members included Alisa’s mom, her sister, their husbands, four children, and two dogs, including the senior German Shepherd. It was tough to move inside the car and was very uncomfortable.

After driving for 16 hours from Kyiv, they reached a village. However, it was not safe even there, and the family decided to move on. Unfortunately, there was colossal traffic when they got to the Poland border.

The family thought that it would be hard for them to stay in the car for three to five days. So Alisa and her family members decided to walk the rest of the 10 miles to the border. It was a freezing morning with a temperature of minus seven degrees. It was very tough for the children and her dogs, Kolt and Pulya.

Pulya, the senior German Shepherd, was 12 and a half and had difficulty walking. She started to fall down after every kilometer she walked. Everyone there told them to leave the dogs, but for Alisa, her dogs were a part of her family, and she was not ready to leave them behind. She & her husband carried the dogs at times while they walked. She had to leave her husband behind in Ukraine and hoped to meet him soon.