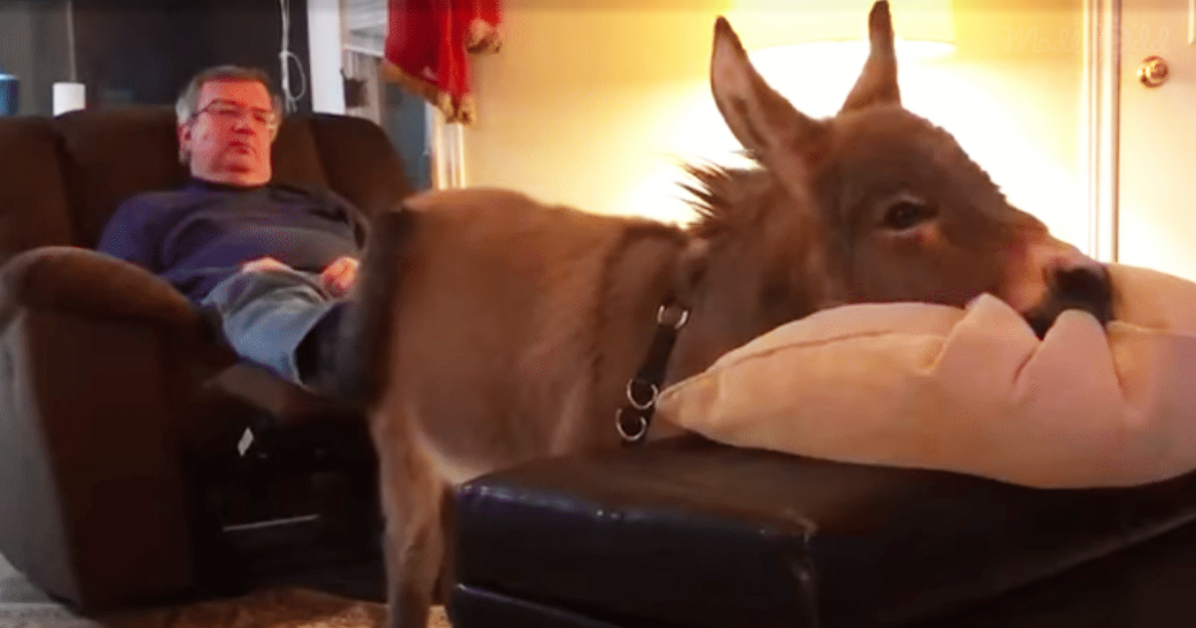 He spends his days snuggled up with the “other” dogs. He may be confused, but he is happy!

Jody and Ted Toppings got quite a surprise on their farm in Ontario one morning when they went out to the donkey barn.  The Toppings saw what they thought was a rabbit on the floor of the barn, but when they looked closer, they realized it wasn’t a rabbit at all.  It was in fact a very tiny, baby donkey that weighed less than ten pounds.  The parents had rejected the poor, little guy because of his size, and he seemed very sick.

Jody and Ted decided to take the foal to the vet since they knew the parents weren’t going to take care of him.  Here, they were told that the donkey’s liver wasn’t functioning as it should be.  With instructions on how to care for the sick foal, the Toppings took him back home. 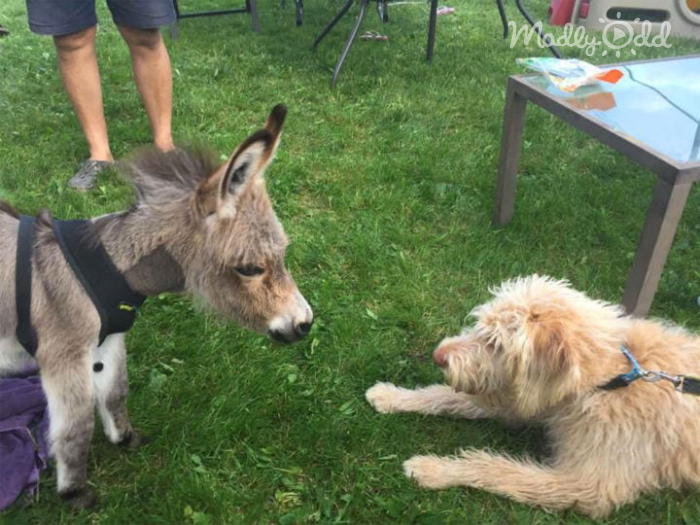 Because of the care involved with feeding a newborn donkey and seeing to his medical needs, Jody and Ted decided to bring him into the house to take care of him there.  The little donkey received a very fitting name – Tiny Tim.  As Tiny Tim grew and became stronger, he figured he must be one of the pet dogs, since he lived inside with the other dogs.  He didn’t know any better.

“Because of his intelligence, the Toppings are now training Tiny Tim to become an emotional support animal.”

Inside the Toppings’ house, Tiny Tim lives as one of the dogs.  He enjoys things most dogs do – going for walks and napping on the floor in the sun. Tiny Tim proved to be an extremely intelligent little guy.  He was even housetrained like the other dogs.  Because of his intelligence, the Toppings are now training Tiny Tim to become an emotional support animal.

In this clip, you get a glimpse into the daily life of Tiny Tim.  Tiny Tim acts so much like a dog, it’s easy for the Toppings to forget that he’s actually a donkey at times.  He wags his tail, likes to toss a ball around, he “cleans” the dishes that are being loaded into the dishwasher, and even has the annoying habit of drinking out of the toilet.

Tiny Tim’s real passion is pillows though.  He grabs nearly every pillow he can.  One day, he stole a total of twenty-two pillows and threw them all into the pool.  This little guy gets into so much mischief, but it’s almost impossible to be mad at him.

You can’t help but fall in love with Tiny Tim once you watch him.  This tiny donkey has a larger-than-life personality.