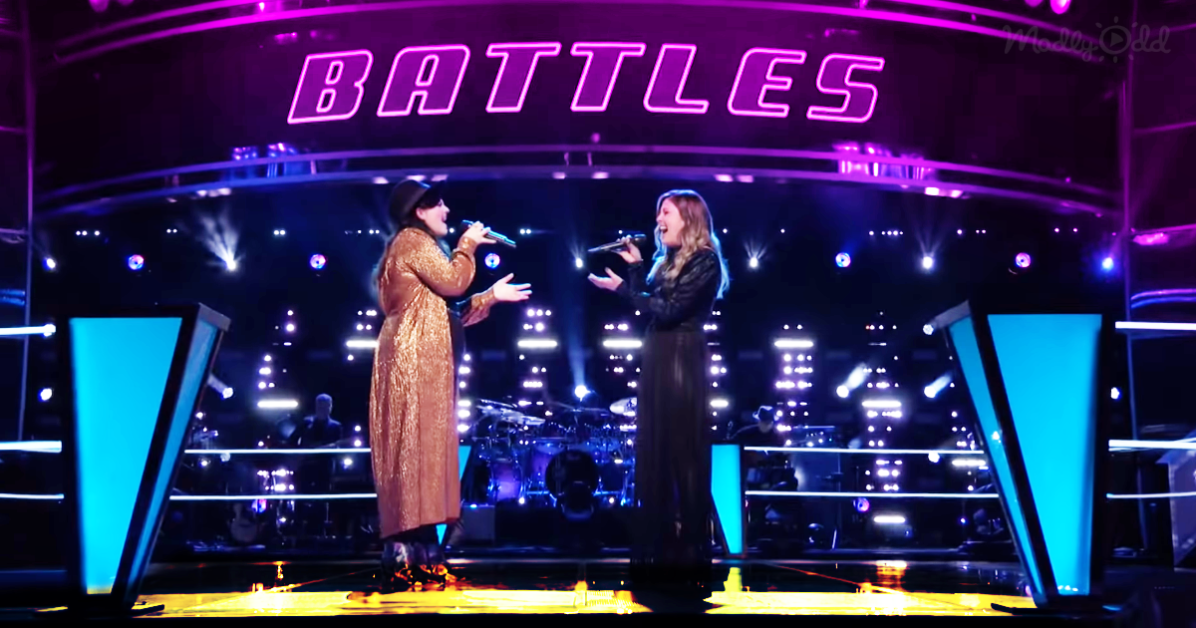 The Adele cover duet received an immediate standing ovation from Clarkson and then the rest of the coaches.

The time has come for the Battle Rounds on this season of The Voice.  Two contestants at a time will have “sing-offs” on a stage that is set up to look like a boxing ring – hence the name “Battle Rounds.”

Although the rounds are considered duels, the duets this week have seemed anything but a battle.  This clip is of the duet that Savannah Brister and Maelyn Jarmon performed together.  It must take some serious self-restraint to solely focus on making the duet sound good for the audience, while still trying to stand out and win.

After the performance, coach John Legend was impressed and commented that the duet had “a kindness to it…You weren’t trying to out-sing each other.  You were trying to do the best you could do.”

These two contestants couldn’t be more opposite.  The seventeen-year-old high school senior, Savannah, has an incredible raw talent that has wowed the judges and crowd.  Maelyn is a twenty-six-year-old vocalist who is professionally trained and one of the most seasoned contestants this season.

Adele’s “When We Were Young” was picked for Savannah and Maelyn to sing together on the Battle Rounds.  They produced an amazing duet that was full of beautiful harmonies and heartfelt moments.  The song was so effortless yet emotional at the same time, and the pair received a standing ovation from the crowd and all four judges for the spectacular performance.

In the rehearsal before the show, John Legend’s team advisor, Khalid, was wowed by the two singers’ interpretation of the song.  He told them, “I can feel it, and it’s chilling and makes you want to cry.”  That’s the best way to describe this song.

Overall, John’s fellow judges thought young Savannah performed slightly better than Maelyn, even though Kelly Clarkson told Maelyn, “Your control of your instrument is unreal.”  Something about the raw talent the high school senior had really captured everyone’s attention.

John had the difficult decision of choosing a winner, even though he was in love with the version of the song that the two gave.  He gushed, “There was this subtilty and warmth…that really made it just a beautiful experience for us to listen to.”  In the end, John chose Maelyn to remain on his team because he was confident that because of her experience, she would consistently deliver each performance.

This version of “When We Were Young” reminds you of something you would hear on an emotional Disney soundtrack.  It was such a beautiful duet, full of gorgeous harmonies and strong solos.

Share this incredible duet with your friends because these gorgeous harmonies will truly uplift and inspire.